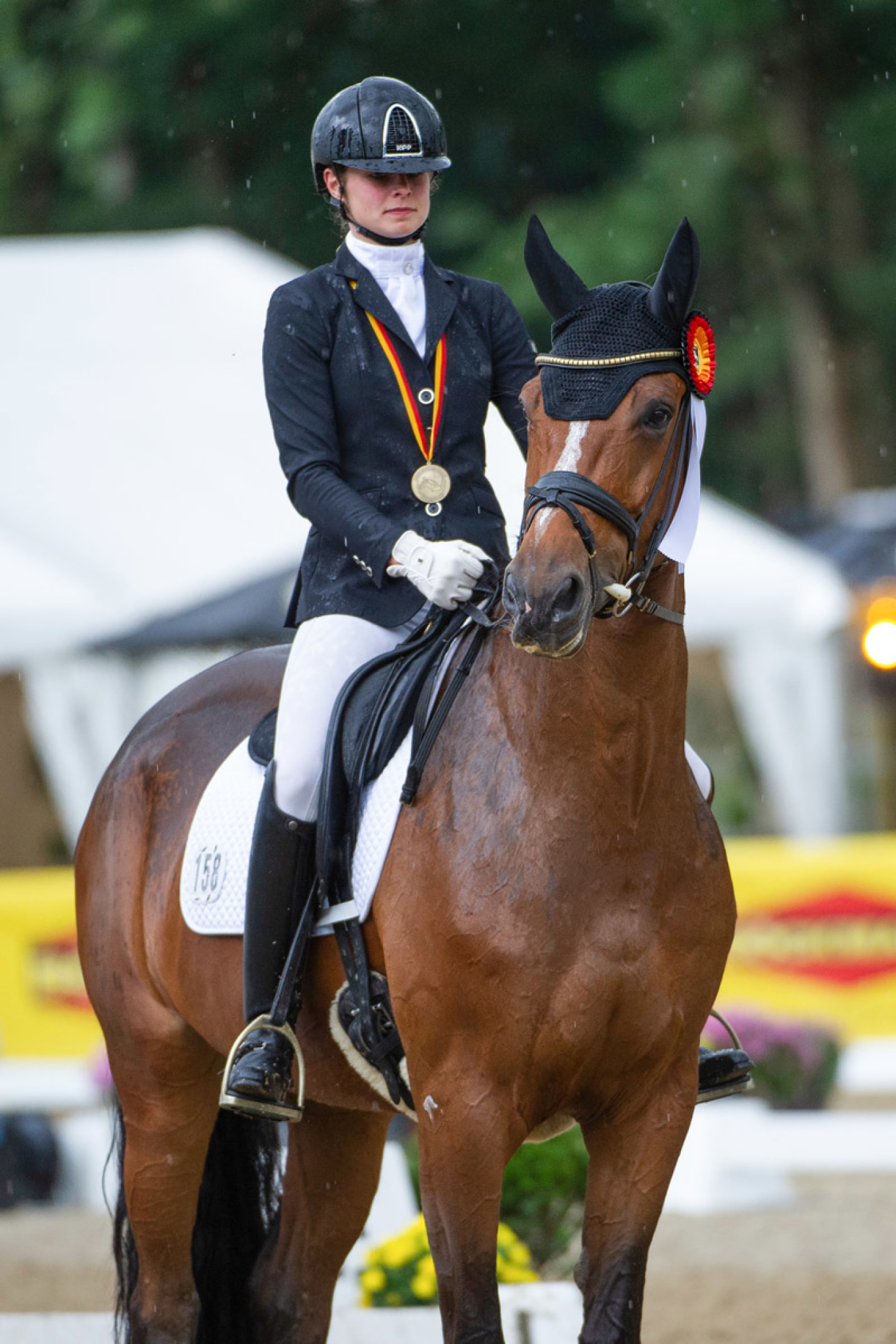 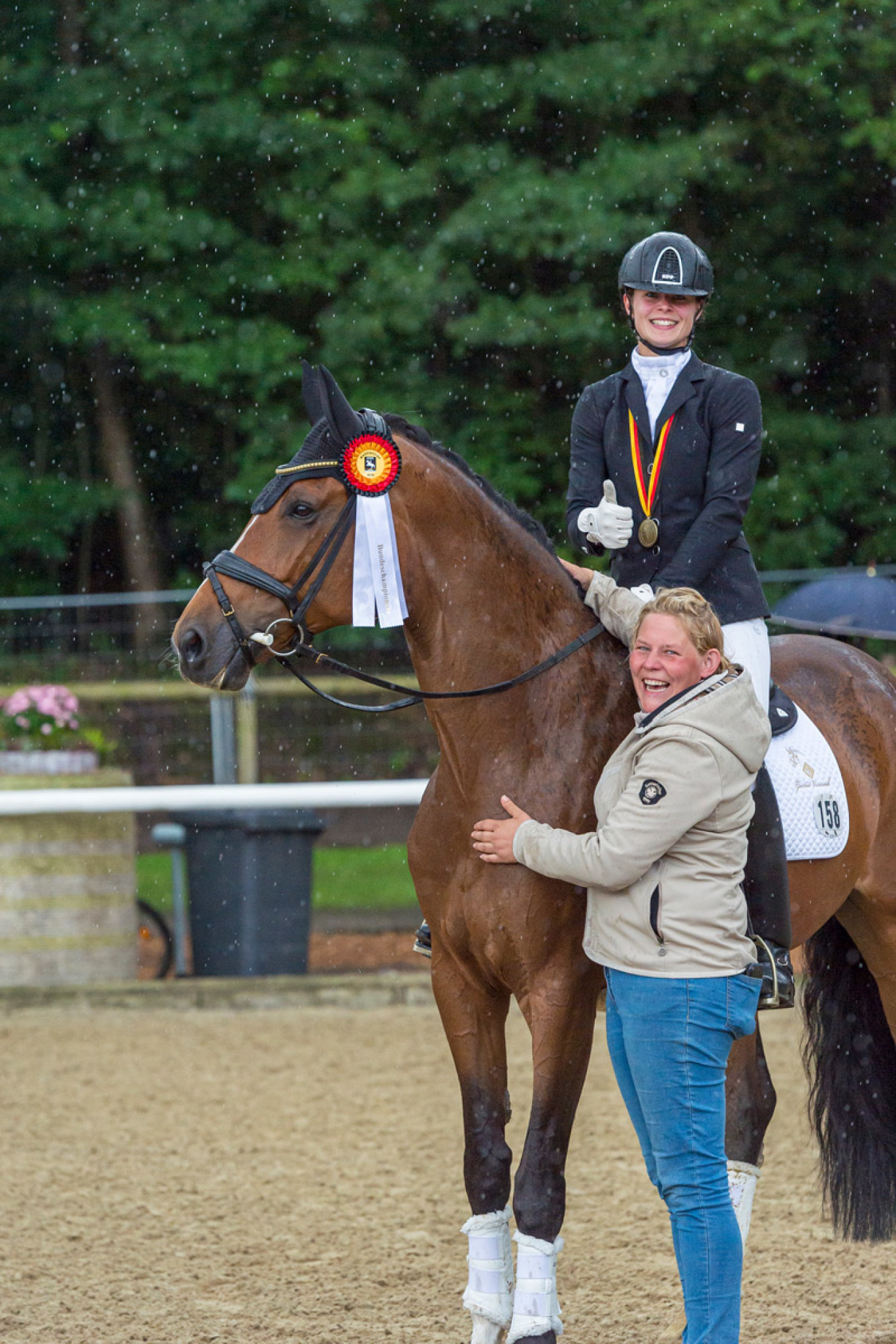 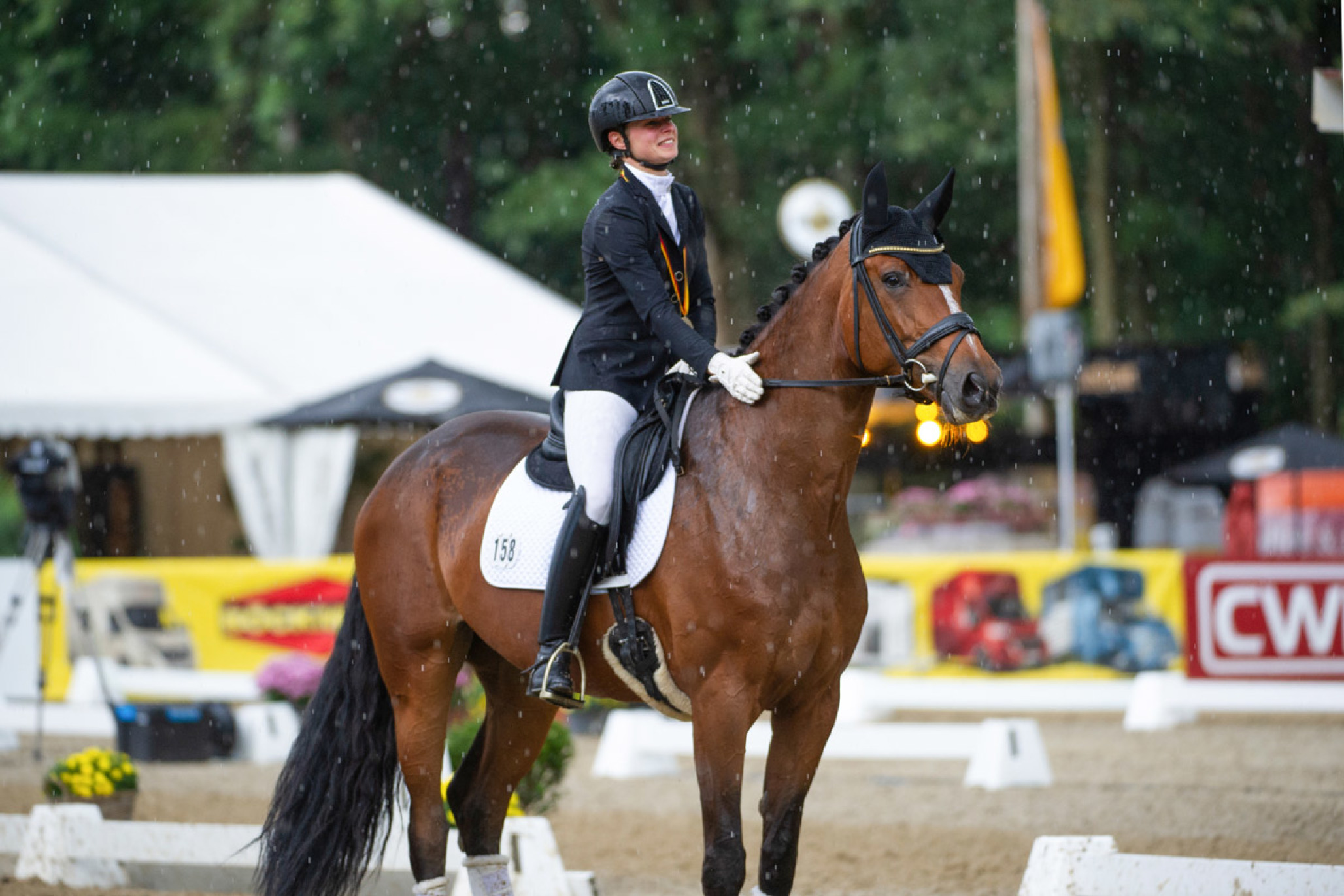 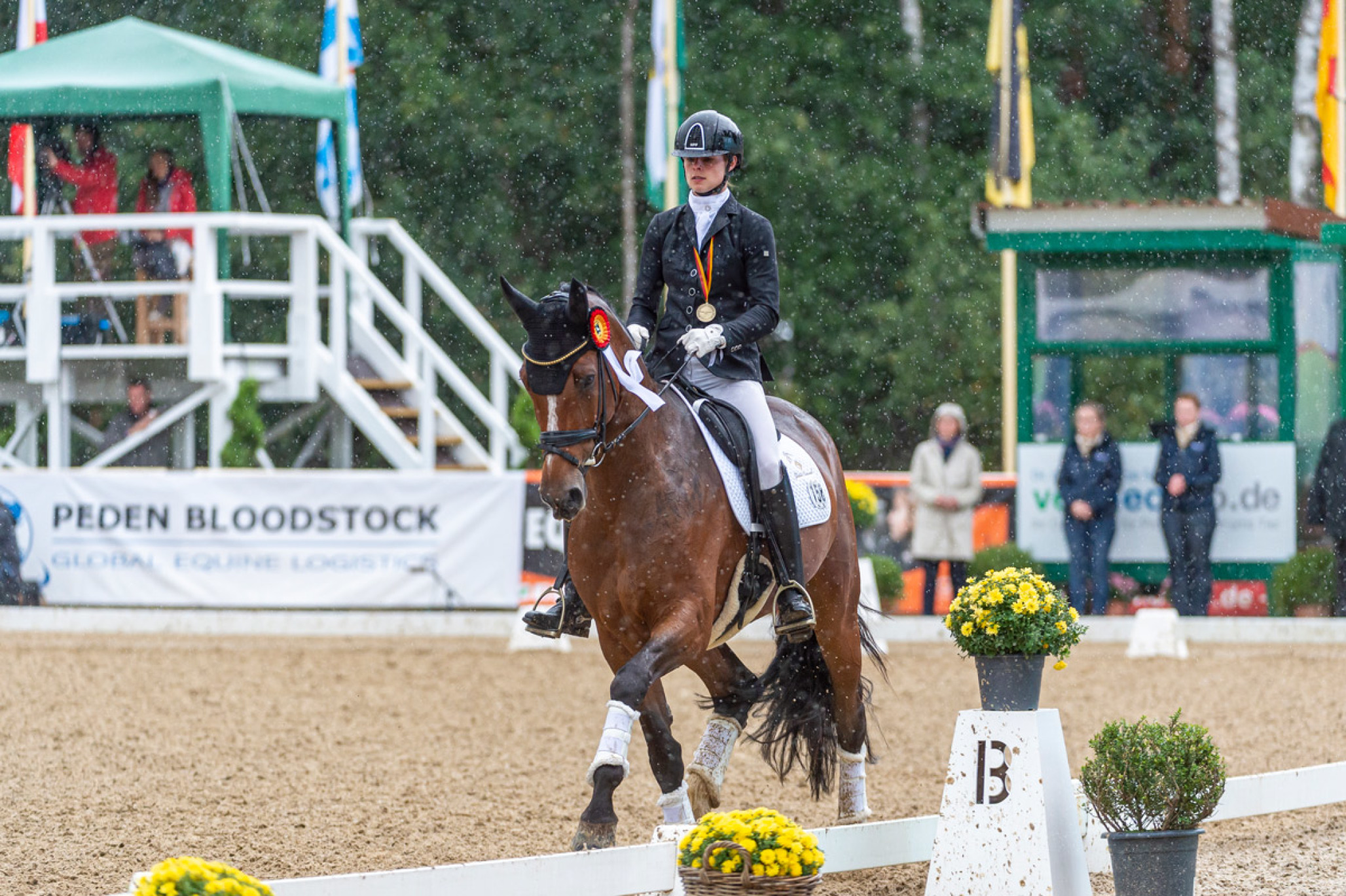 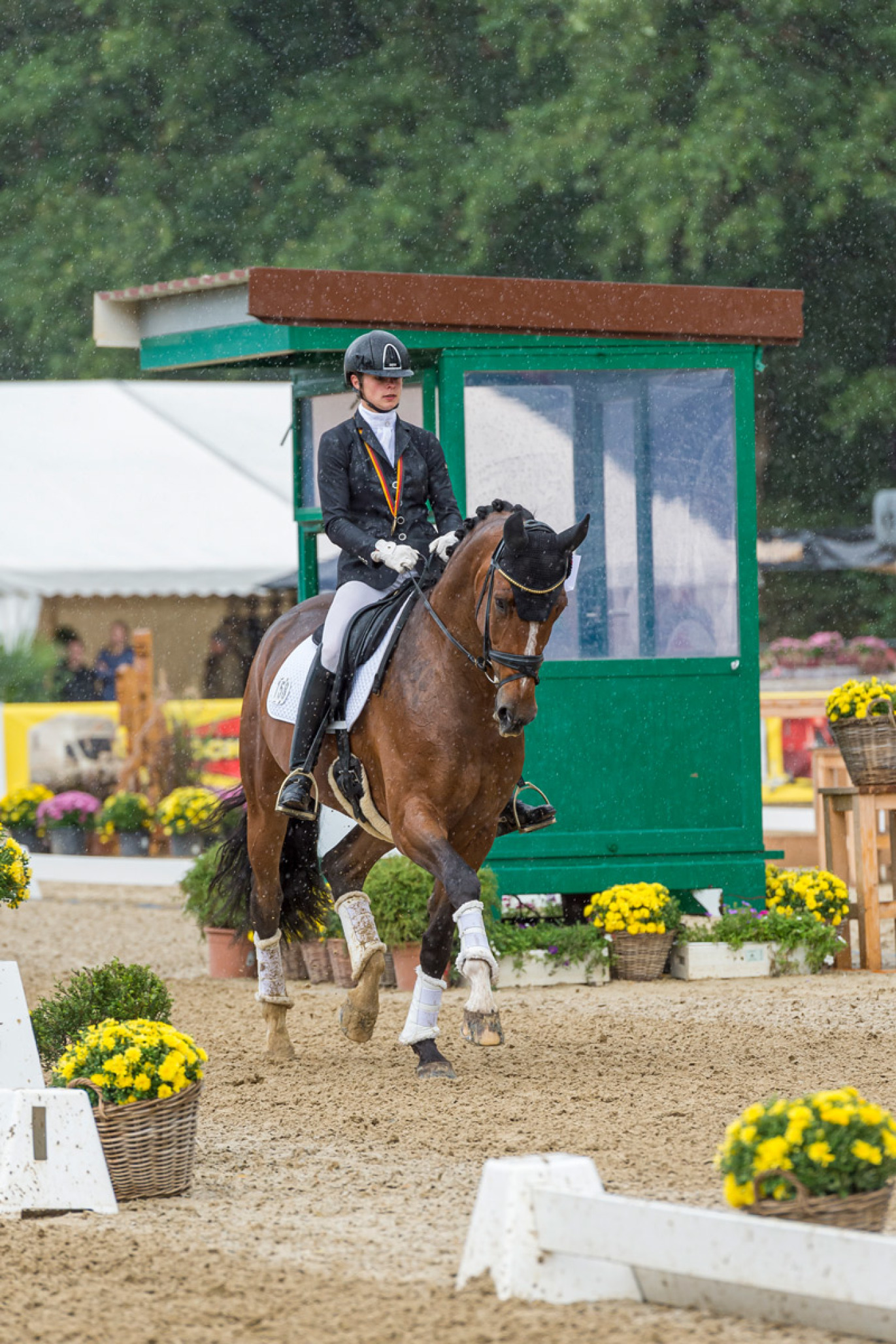 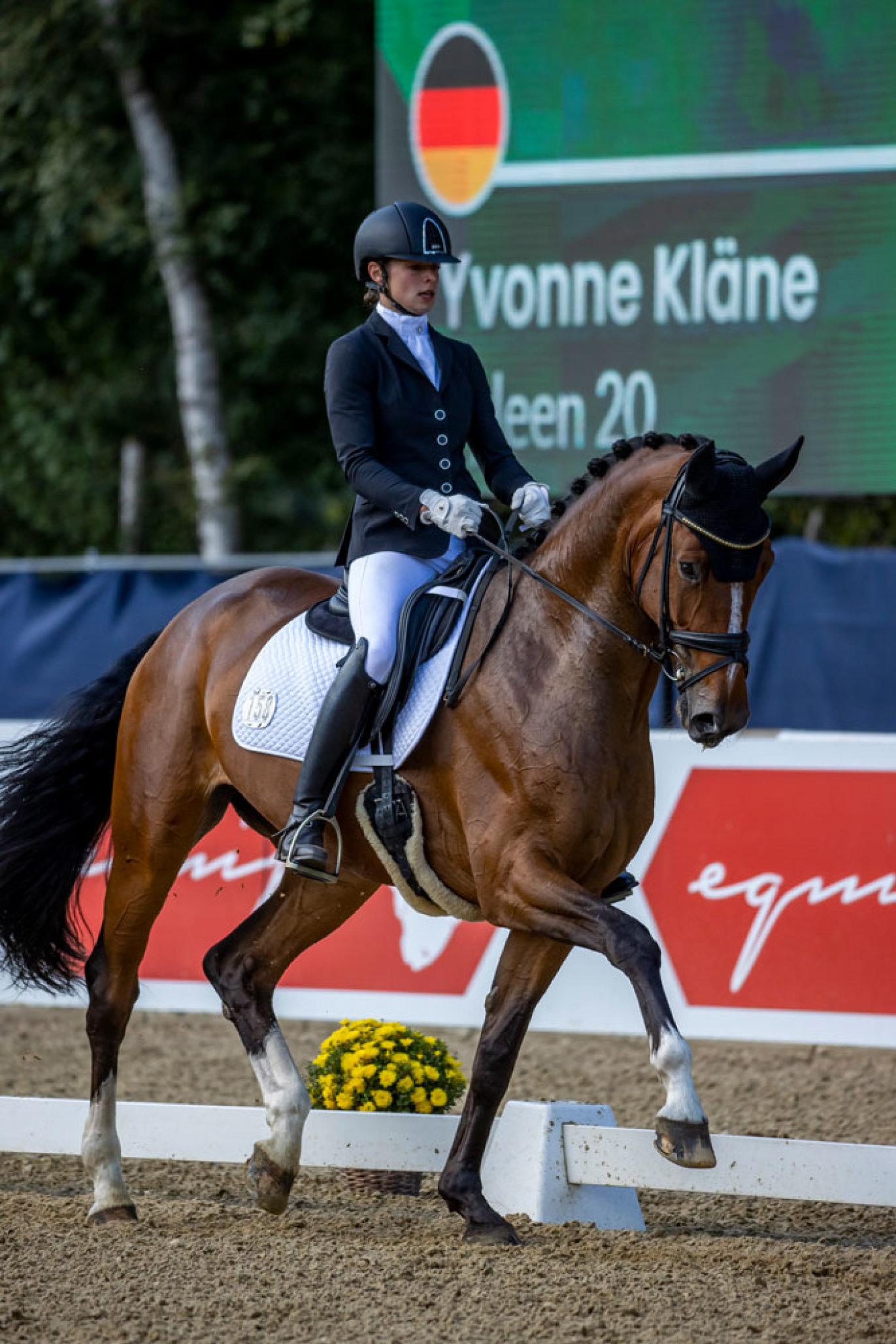 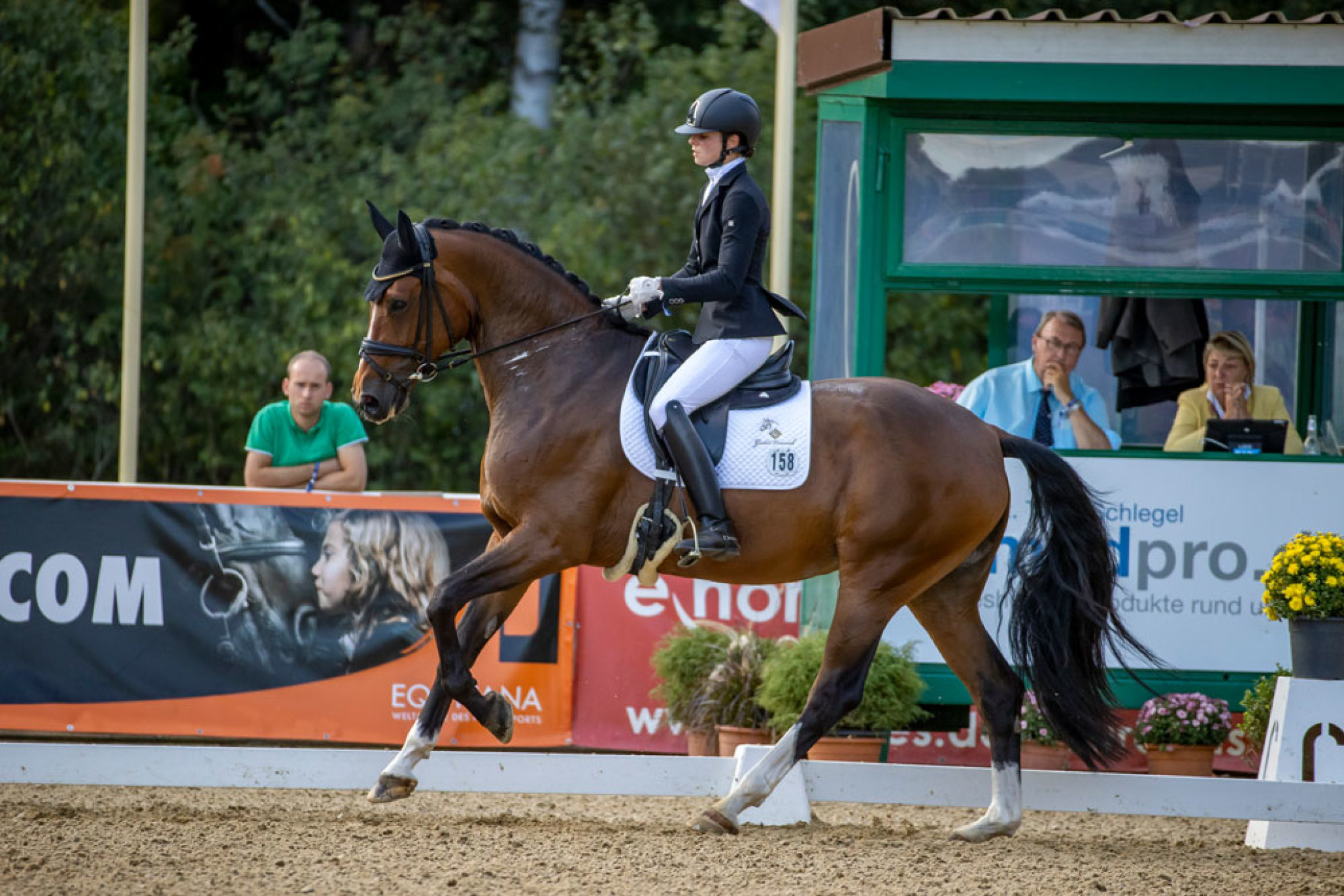 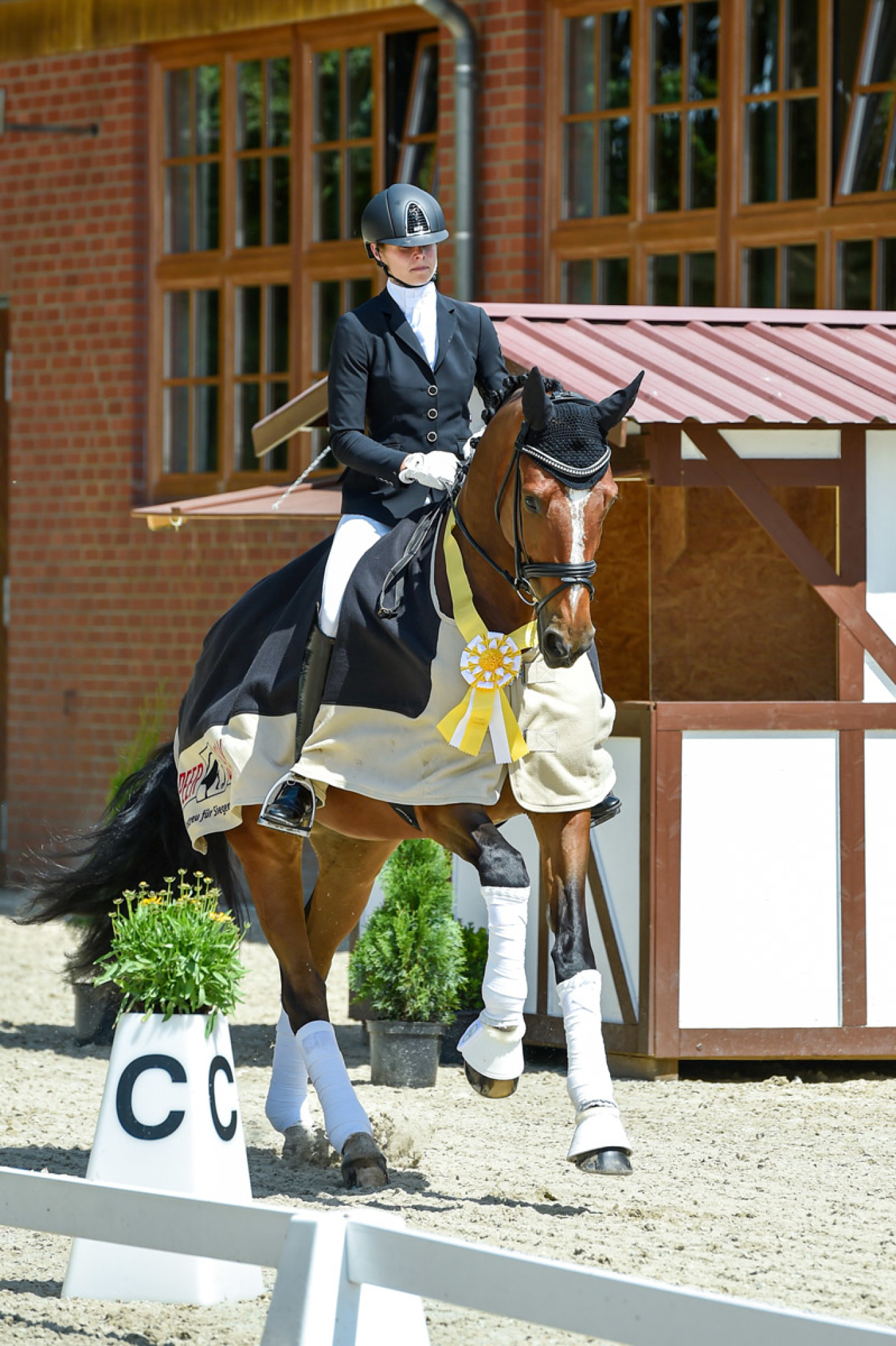 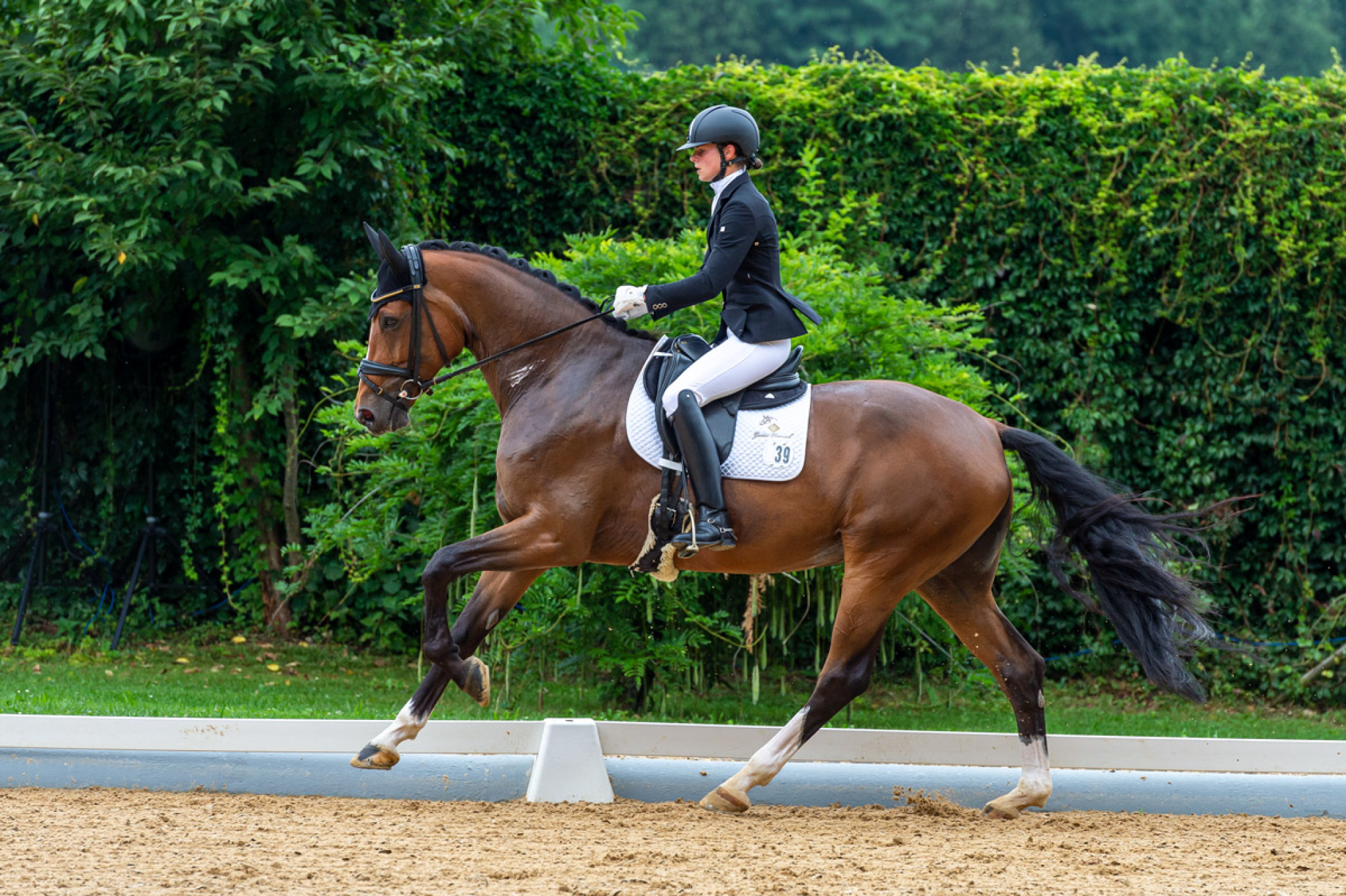 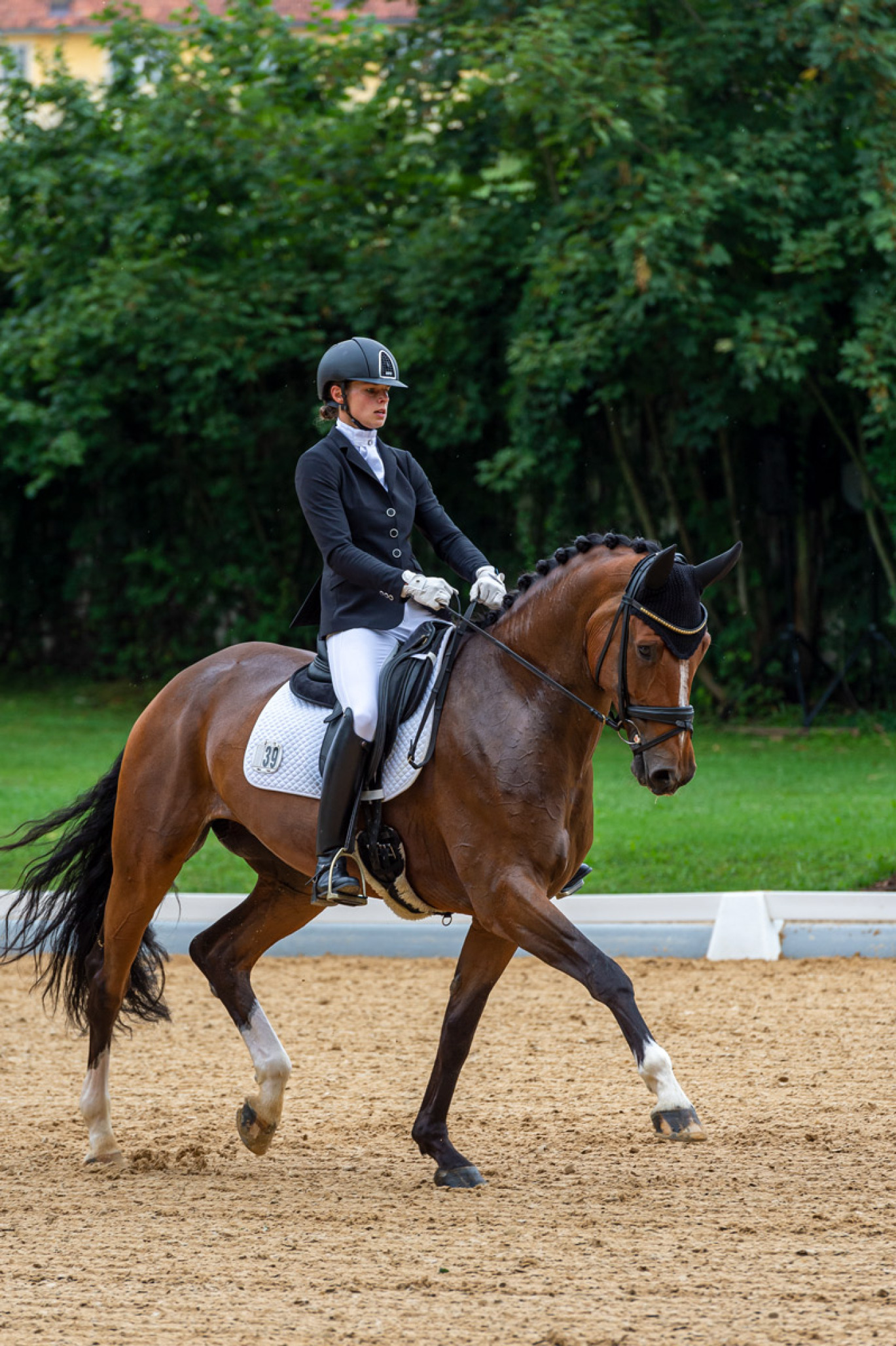 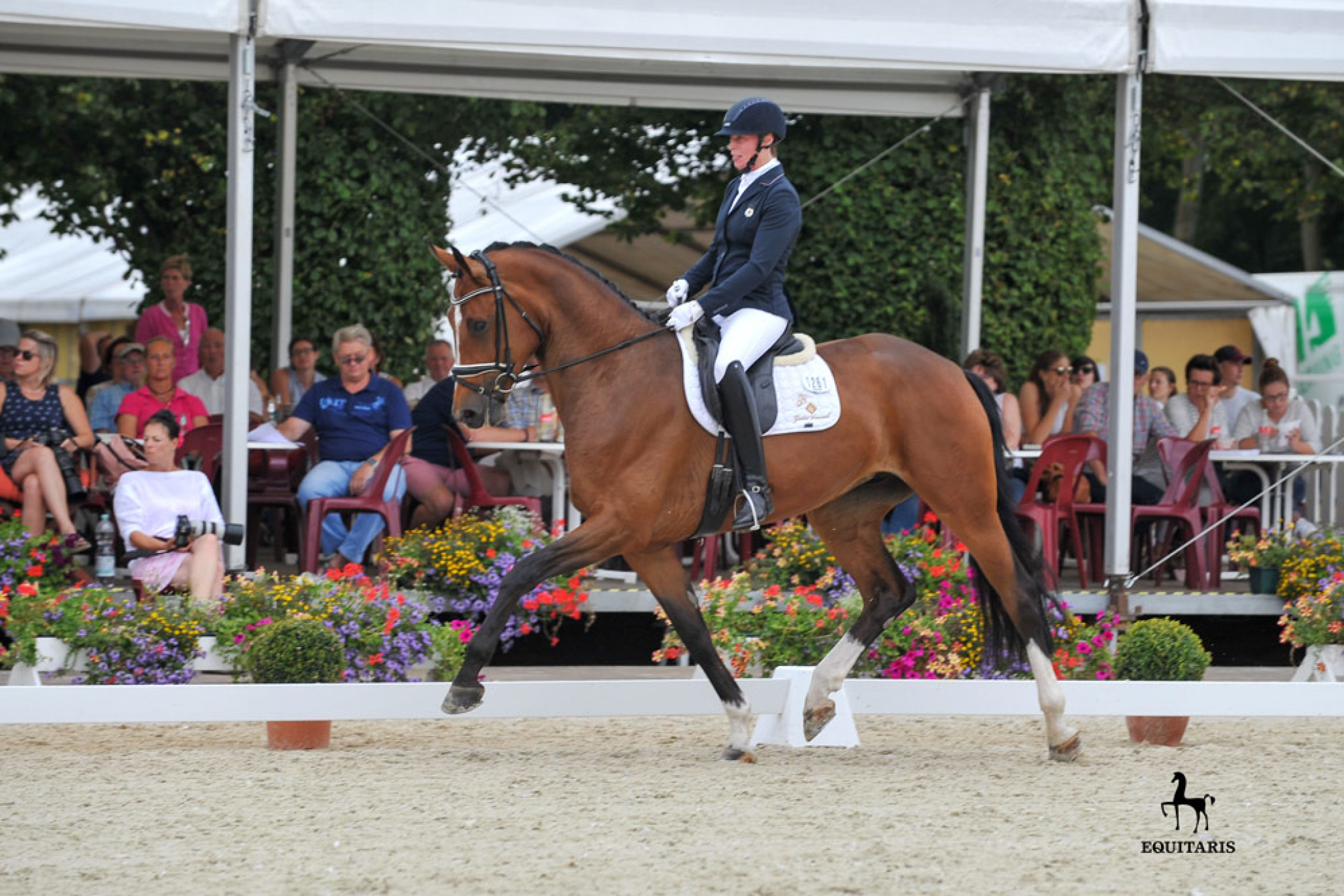 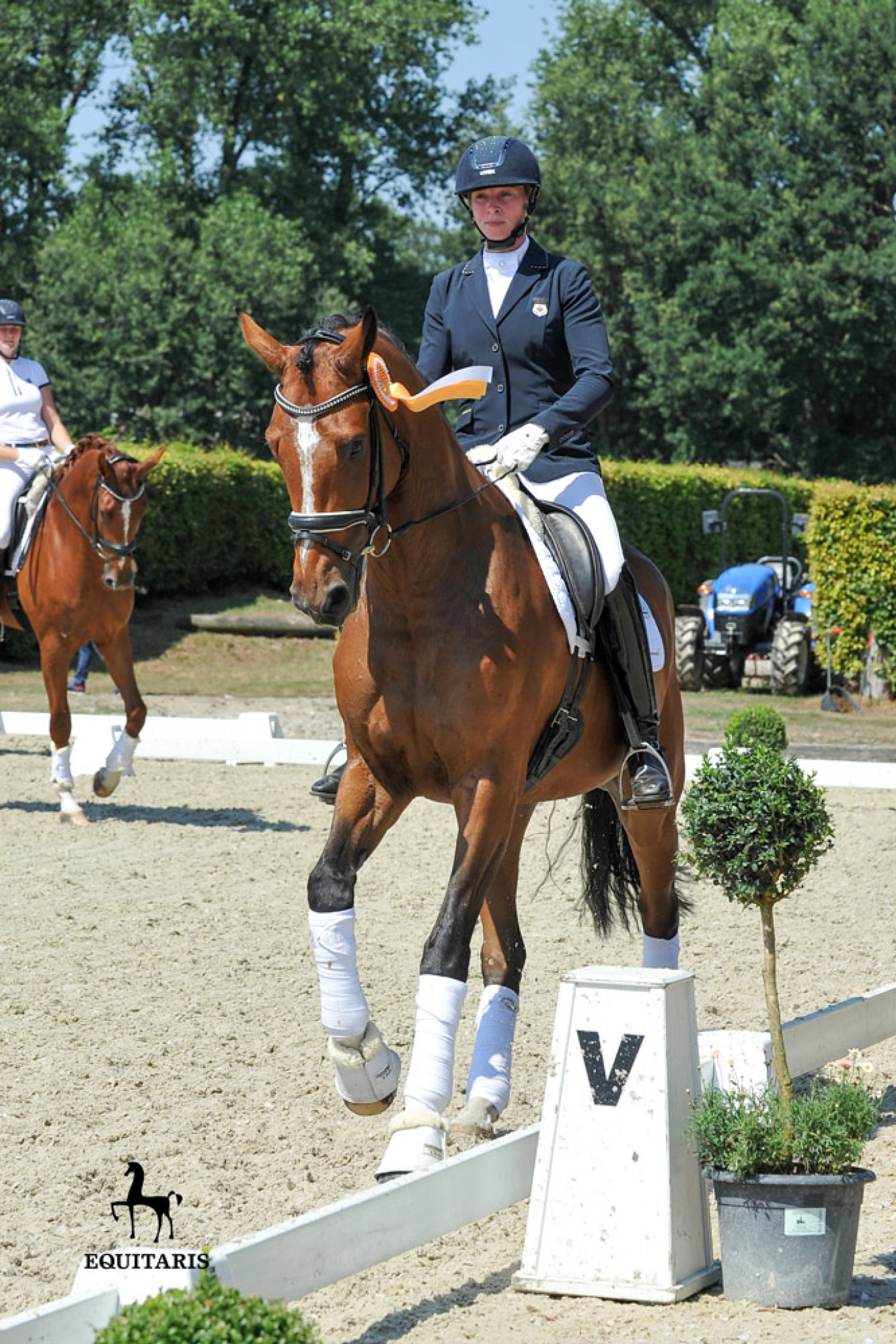 In 2018, Eyleen won silver in the Westphalian Championships for four-year-old riding horses under Melanie Tewes, after the pair had won the final qualification. At the age of five and six Eyleen and Yvonne Kläne celebrated series victories in tests for young dressage horses, also internationally, and won bronze against strong competition at the Bundeschampionat.

As a three-year-old Eyleen had already won bronze at the Westphalian Championships under Andrea Krehenwinkel and then bronze at the Bundeschampionat. Here the canter and walk were each awarded a score of 9.0.

The sire Escolar was double Bundeschampion of riding horses, second in the Burg-Pokal, fourth in the Louisdor Prize, sixth in the Special and fifth in the Freestyle at German Championships and is in the German Olympic squad with riding master Hubertus Schmidt. More than 20 of his sons have already been approved for breeding. Among his numerous offspring that have been successful in sport are the riding horse Bundeschampion Eternity/Eva Möller, the World Championships for young dressage horses Espe/Eva Möller, the Bundeschampionat Fourth Estero/Beatrice Buchwald.

Eyleen's dam Larronesse also produced the state premium mares Via Noblesse (by Vitalis) and Ekantara (by Ehrenstolz), who took fourth place at the Westphalian Elite Mare Show in 2016. Liss La Belle (by Lissaro) placed fifth in the Bundeschampionat Final of four-year old riding horses in 2015.

The dam's sire is the NRW State Stud Stallion, Laurentianer, who was promoted to Grand Prix level. In 2000, he became World Champion of young dressage horses when he was six years old and placed fifth in the Bundeschampionat Final of young dressage horses. Eleven of his sons were licensed, in sport the Grand Prix stallion Laureus NRW or Laura Lux/Dorothee Schneider and Hedda Droege stand out.

Granddam First Dream was a full brother of Eyleen's dam and produced the Grand Prix winning Little Diamond. Under Tara Schneider he placed at the German Championships for Juniors and Young Riders. Encino (by Ehrentusch) went in sport up to advanced level, American Dream (by Arpeggio) placed in show jumping up to medium level.

The stallions Fagott and Frühlingsrausch follow in third and fourth place in the pedigree.

The third dam, State Premium Mare Funerailles, is half-sister to the licensed stallion Ehrenwert and Grand Prix winner Eljano (both by Ehrentusch). She herself produced the Olmypia, WEG and European Championship participant Egalité (by Ehrentusch) under Nina Stadlinger/AUT. His full sister Ecciavelle won bronze at the 1994 Bundeschampionat for young riding horses and the full sister Elysee placed in advanced level show jumping competitions. Funerailles daughter First Dance (by Finalist) produced the advanced (S) level dressage horses Emeraude and Egoutier (both by Ehrentusch), as well as the show jumper Emanuela (by Ehrenwort), who won over 20 advanced (S) level show jumping competitions.

From the Hanoverian mare line of Wolke, there are other sport horses such as Divertimento (by Di Versace)/Tinne Vilhelmson-Silfvén/SWE and Heather Boo/USA and German Dancer (by Game Fox), who won bronze and silver at the Bundeschampionat when he was five and six years old and competed in Grand Prix under Marion Wiebusch, as well as licensed stallions such as Rosenduft (by Rosenkavalier).