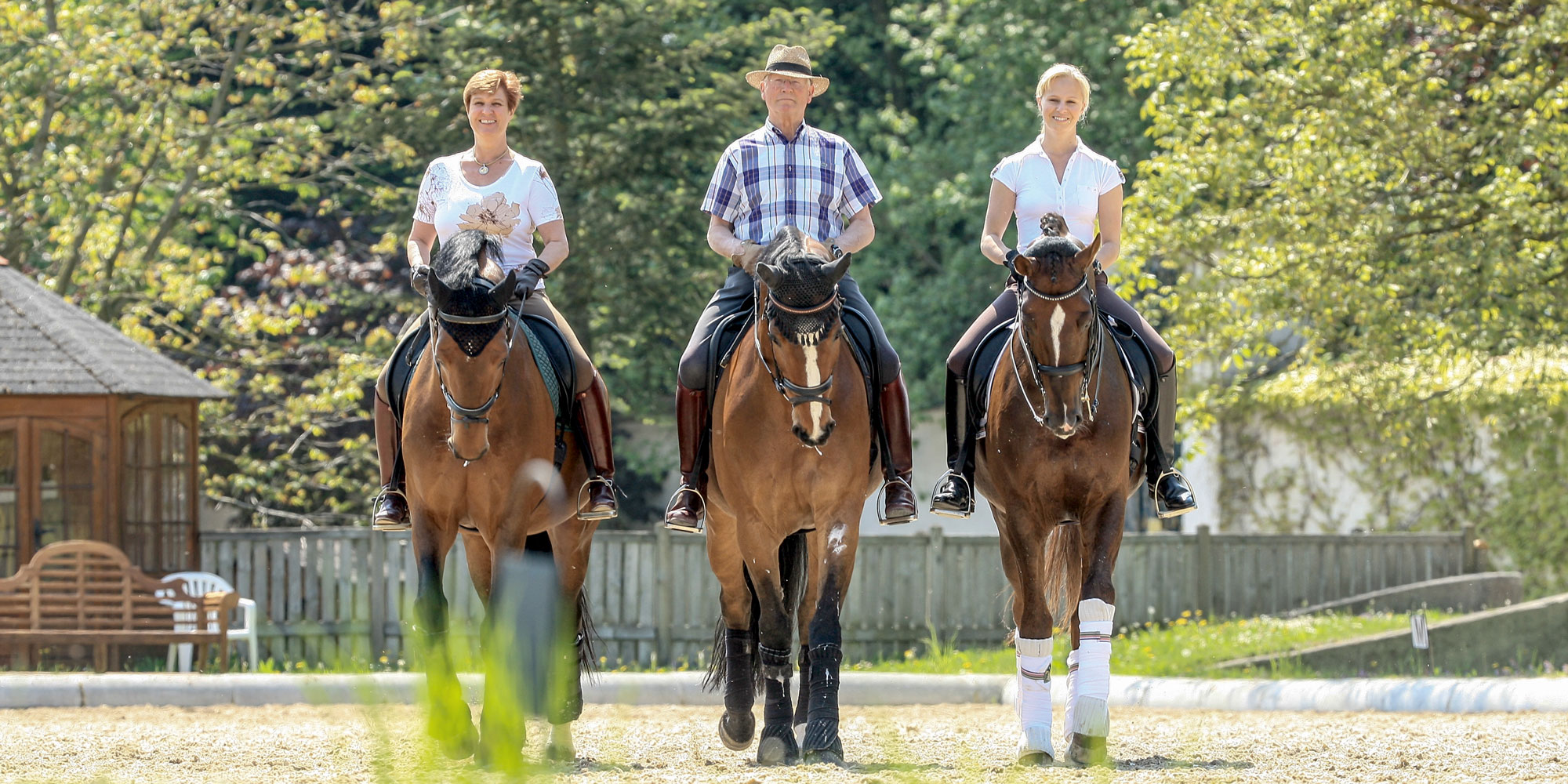 Horses have taken a liking to Elisabeth, called Sissy Max-Theurer. From childhood on. However, this love was not pre-formed, especially not by her parents, the industrialist and inventor Dr. Josef Theurer and the teacher Dorothea Theurer. In retrospect, it must have been the accidental encounter with riders during a walk in the woods together with her mother that started the fire. From then on there was no stopping. Sissy Theurer wanted to learn to ride. Absolutely!

The cocker spaniel, which was given instead, was also highly loved, but was not a substitute. And the parental strategy that first lungeing lessons would lead to a "sore bottom" and thus to the end of the horse obsession also proved to be a mistake.

But it was a long way from the first riding lessons in 1966 in Hinterbrühl near Vienna to the title of European Champion in 1979 in Aarhus, Denmark, and the 1980 Olympic victory in Moscow. And a stony one at that.

1968 Sissy Theurer got her first horse. The little Lipizzaner Pluto Alda. Since "Flotzi" did not think much of the budding show ambitions of his rider, Lady and another mare were added. Nevertheless Sissy Theurer had to make do with the last place.

But then it went ahead. The first victory in the National Youth Championship dates back to 1971. Just like successes in L/M show jumping. In the end, however, she lacked the courage for a career in the show jumping ring.

Sissy Theurer's career really took off when she was trained by Hans Max from 1973. They had already met in 1968 at the spring tournament of the Wels Equestrian Federation: the then twelve-year-old riding enthusiast and the self-taught and exceptional expert in the saddle. Fifteen years later the two got married.

But another lucky coincidence was to play an important role later. In 1973, Sissy Max-Theurer received the young black horse Mon Cherie as a gift from the owner Hans Schwelm, Neuss, when he bought the Hanoverian Le Fort.

But first Sissy Max-Theurer conquered the big square on her black Mascagni and made it into the Austrian Junior European Championship team.

Numerous successes followed, the most valuable of them on Mon Cherie. Its first steps were disappointing. Hans Max, various with his instructor latin at the end, which may mean something - even recommended selling - but "gifts are not sold". And so Mon Cherie was allowed to stay.

Persistent work made the grey horse mature into a dressage horse of international format, with absolute highlights in the piaffe-passage tour and the pirouettes. At the 1979 European Championships in Aarhus, Denmark, the sensation was the newcomers Mon Cherie and Sissy Max-Theurer duped the entire dressage elite, especially Christine Stücklberger from Switzerland, who had been considered unbeatable until then. At the 1980 Olympic Games in Moscow, the next gold medal was added to this list.

The number of victories and placements that Sissy Max-Theurer achieved in collaboration with her husband and coach Hans Max-Theurer is impressive: In the period from 1978 to 1984 the state-certified riding instructor won the Austrian National Championships six times, was successful internationally in Aachen/GER, Rome/ITA, Berlin/GER, Munich/GER, Copenhagen/NED, Goodwood/GBR and Paris/FRA and, with Acapulco, took tenth place in the individual classification at the European Championships in Aachen in 1983 and eleventh place at the Olympic Games in Los Angeles/USA in 1984.

After the birth of her daughter Victoria in 1985 and her son Johannes in 1987, she made her comeback four years later. At the 1992 Olympic Games in Barcelona/ESP she finished eighth in the dressage finals with Liechtenstein. After twelfth place in the individual classification at the 1994 World Equestrian Games in The Hague/NED, she finished her active career.

Since 1995 she has been supporting her daughter Victoria, who has been riding from success to success in the dressage arena. First with the juniors and then directly in the senior camp. Son Johannes, completely against the family tradition, has dedicated himself not to horses but to fish. He is passionate about fishing. In the meantime he has taken over the management of his grandfather's company.

Sissy Max-Theurer's heart also beats for horse breeding. On Augustin OLD, the horse she bred, her daughter Victoria won the Burg-Pokal and finished fifth at the European Championships, sixth at the WEG and 13th at the Olympic Games. In 2009, Sissy Max-Theurer acquired Vorwerk in Cappeln/GER for her mares Gestüt Vorwerk in order to keep it as a breeding station, just as the last owners Gudula Vorwerk-Happ and Jochen Happ had wished.

Since 2002 Sissy Max-Theurer has been active as President of the Austrian Equestrian Sports Association (OEPS). Besides she brings in as Turnierveranstalterin, international 5*-judge, vice-president of the Austrian olympic committee and as generous supporter of social projects as well as measures for the animal protection always its whole Kraft and its enormous specialized knowledge.

Hans Max, born on August 17, 1942 in Wels, came to the horse comparatively late. After a ride on the grey stallion Silver. 14 he was there. Until then rather an underwater world fan. He wanted to become a diver. But after the ride on Silver suddenly everything was different. Given the choice by his father, "moped or horse?", the horse bacillus infected horse clearly decided - for a horse! Even during his apprenticeship as a builder and art locksmith, the horses did not let him rest. In the truest sense of the word. Already at five o'clock in the morning he went to the stable to care for them and ride them before work.

Hans Max earned his first spurs with cavalry officer Wilhelm Pichler. "You should be shot down, you ride so badly. But you have talent. I will teach you. You will suffer a lot." Months of training on the lunge followed. Without reins and without stirrups. A hard school. But also a foundation on which he could build - and was always grateful for it.

Hans Max never had another coach. He taught himself. Diligence, discipline, ambition, self-criticism and above all - today one would say - horsemanhip. These qualities drove him on - from class L to Grand Prix. Until deep into the night he brooded over problems and their solutions. And right in the morning he swung back on his horse to do better.

In 1969 he was offered a position as a riding instructor in Ampflwang. He accepted. And promptly delivered his first masterpiece: out of the small Ampflwang halflipizzaner Astor, he formed a Grand Prix horse. And that without ever having felt piaffe, passage and tempo changes on a trained horse. Imagination and empathy for what he had seen in others. That was enough for him. And even brought him into the national squad trained by Georg Wahl and to the World Championships in Copenhagen, where he competed on Astor in 1974.

Hans Max broke off his apprenticeship as a rider, which he had begun in 1971 at the Spanish Riding School. After only nine days. The trainer of numerous advanced (S) level horses did not want to start again with lunge lessons "from scratch".

In 1968 Hans Max had made the acquaintance of Elisabeth "Sissy" Theurer. In 1974 he took over the training of the up-and-coming young rider. She was to become his most successful student: European Championship gold in 1979 in Aarhus, Olympic gold in 1980 in Moscow, further top ten placings at World and European Championships as well as Olympic Games and six Austrian State Champion titles can be attributed to the successful duo.

In 1983 Hans and Sissy - now Max-Theurer - gave themselves the yes-word. Two years later their daughter Victoria was born. In 1987 son Johannes followed. While Johannes is more interested in fish (on the fishing rod) - and in the meantime has taken over the management of his grandfather's company, a global player in the field of track and machine construction, Victoria shares her parents' enthusiasm for horses. Under her father's coaching aegis, she has won four European Championship medals in the junior class, participated in numerous World and European Championships (including fifth place at the European Championships in Windsor and sixth place at the World Championships in Caen) and participated in four Olympic Games (with 13th place in the London Freestyle Final).

Hans Max-Theurer has led dozens of dressage horses to the top, including Mon Cherie, Acapulco, Liechtenstein and Augustin OLD, bred by Sissy Max-Theurer herself, four horses that reached the finals at the Olympic Games. Due to his successes, he was awarded the title of riding master. Every day he got into the saddle and rode three to five horses. His training secret? "I was always dependent on myself, I read, tried and thought about many a problem for nights on end. His training secret? "I don't want to train puppet riders who only feel what is said from below." And the horses he prefers? "All top horses are difficult in their own way, but not all difficult horses are top horses. As a trainer, you have to accept what the horse offers and know how to use its energy."

His professional expertise, but also his human qualities of a rather silent but all the more precise observer were appreciated. Thus Hans Max-Theurer performed valuable and visionary work for the Austrian Equestrian Federation as a training consultant for decades.

Hans Max-Theurer was not only a horse man and trainer icon. He also still found time for another great passion, the art of the Middle Ages. With a great deal of expertise and just as much passion, he collected antiques and used them to decorate the two family owned castles in Achleiten and Kammern.

Topy, Black Jack and Lucky Luke - these were the names of the ponies on which Victoria Max-Theurer learned to ride as a child. And also won her first ribbons. It was her father, riding master Hans Max-Theurer, who instructed her. From her first sitting exercises on the pony back to her participation in Olympic Games.

Arigento and Falcao OLD were also the ones with which Victoria Max-Theurer made the leap into the Grand Prix class and won the first of a total of 13 Austrian national championship titles. She was also joined by Weinrausch. In 2003 she qualified for the European Championship and was the youngest participant in Hickstaed/GBR at the age of 17. As a team "chick" she delivered the second best result in Team Austria. Seventh place in the team classification meant the Olympic qualification. For the first time since 1984 a team from the Alpine Republic was allowed to travel to the Olympic Games. In 2004 in Athens/GRE, Victoria Max-Theurer was the youngest dressage rider of all times to enter an Olympic arena at the age of 18.

In 2005, 21st place at the European Championship in Hagen a.T.W./GER again meant the highest ranking within the Austrian team which was placed tenth. Her first World Equestrian Games 2006 in Aachen/GER ended with Falcao OLD on 19th place in the Grand Prix.

In 2007 she reached the freestyle final of the best 15 at the European Championships in Turin/ITA for the first time. In 2008 she competed at her second Olympic Games - this time in Hong Kong.

In the meantime, the Burg-Pokal winner Blind Date FRH and Della Cavalleria OLD added further successes at the European Championships 2015 in Aachen/GER and the Olympic Games 2016 in Rio/BRA.

With her offspring Grand Pix horses Benaglio, Abegglen FH NRW and Rockabilly, Victoria Max-Theurer is aiming for her fifth Olympic Games with Tokyo 2021.