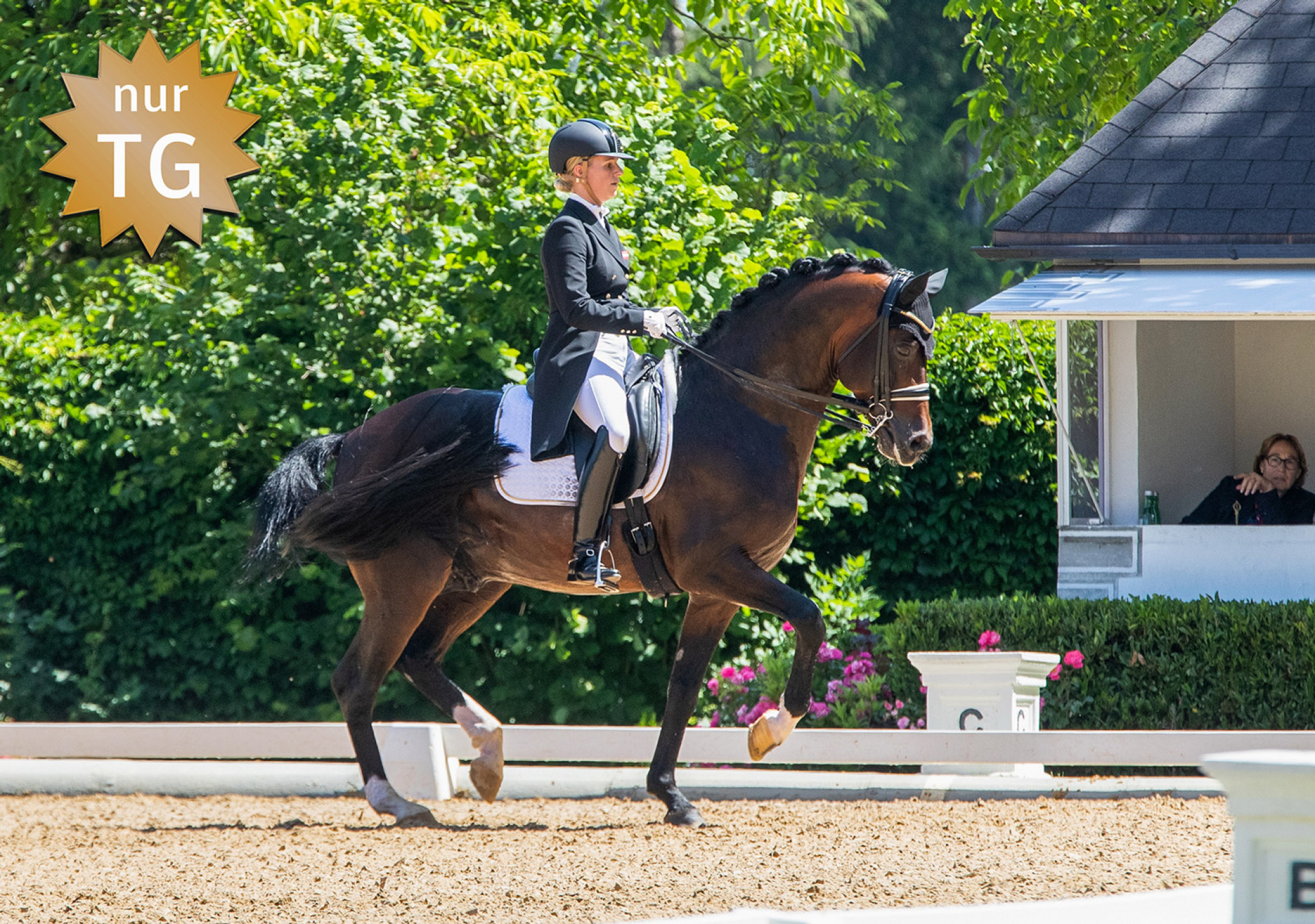 Birkhof's Topas FBW, bred by Simone and Martin Meder, started his career at Birkhof Stud in Donzdorf, Baden-Württemberg. He was initially ridden by Nicola Haug (who also accompanied Gestüt Vorwerk's Pathetique to his first shows, including winning the Southern German Championships). At the age of five, Nicole Casper took over the further training of Birkhof's Topas FBW. At six and seven years old, the pair won the Black and Gold ribbon at the State Championships and were also in the finals at the Bundeschampionat in 2017. In 2018, Birkhof's Topas FBW won serially in advanced (S) level dressage competitions and in 2019, as an eight-year-old, he already recorded victories at S3* level. A special success! At that time, he was the first Totilas son registered in Germany with victories at 3* level. In 2021, Birkhof's Topas FBW made his debut in the international Grand Prix class under Nicole Casper and finished second and fourth with 73.809 and 72.674 percent in the Special Tour of Achleiten/AUT.

In the middle of 2021, the fifth in the European Championships, sixth in the World Championships and 13th in the Olympics, Victoria Max-Theurer/AUT, took over the further sporting promotion and was able to place in the Grand Prix dressage competitions in Ankum and Ising right away with Birkhof's Topas FBW. In 2022 the international breakthrough followed with victories in Munich and Achleiten/AUT with results of over 76 percent and second places in Fritzens/AUT. The pair also took part in the World Championships in Herning/DEN. 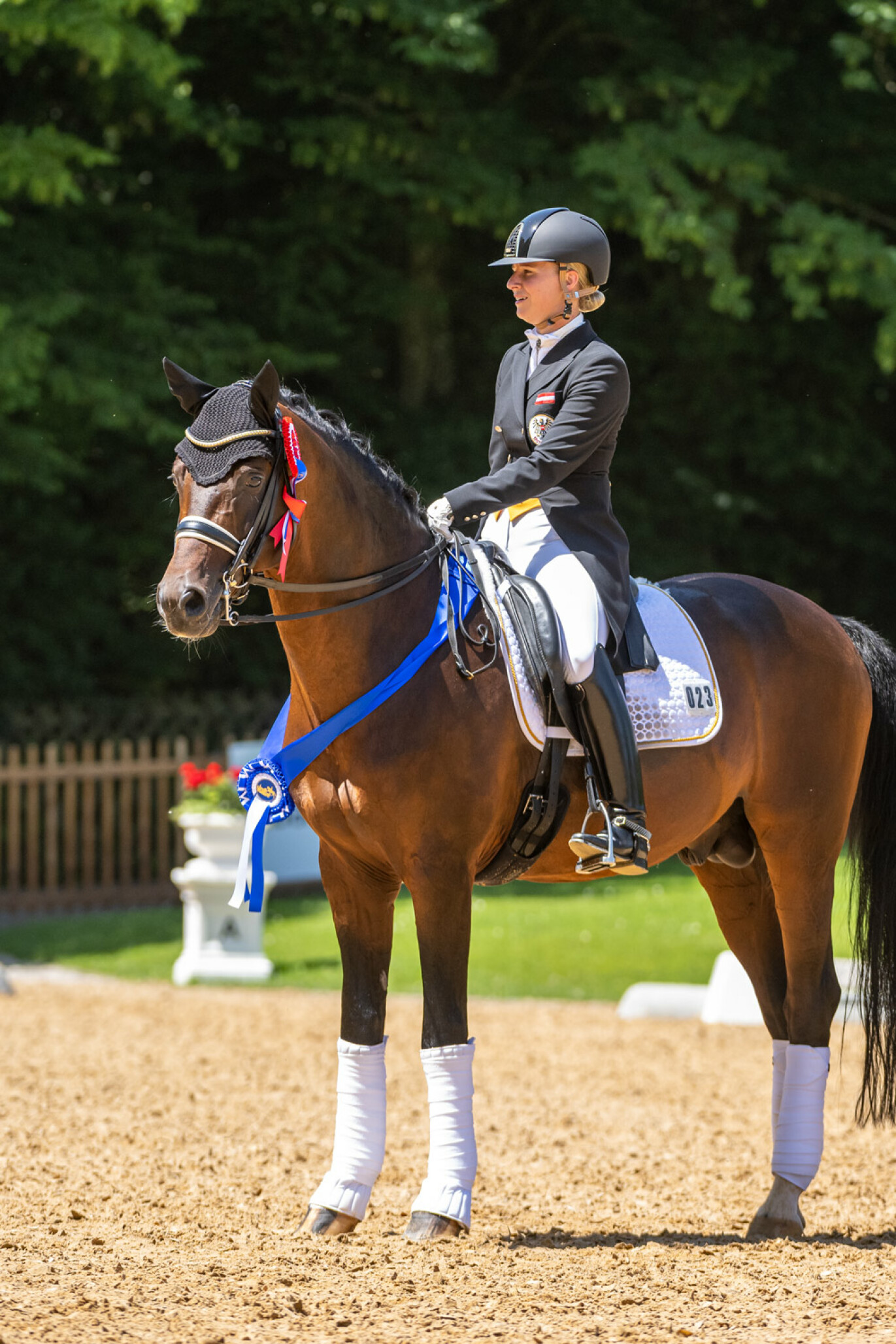 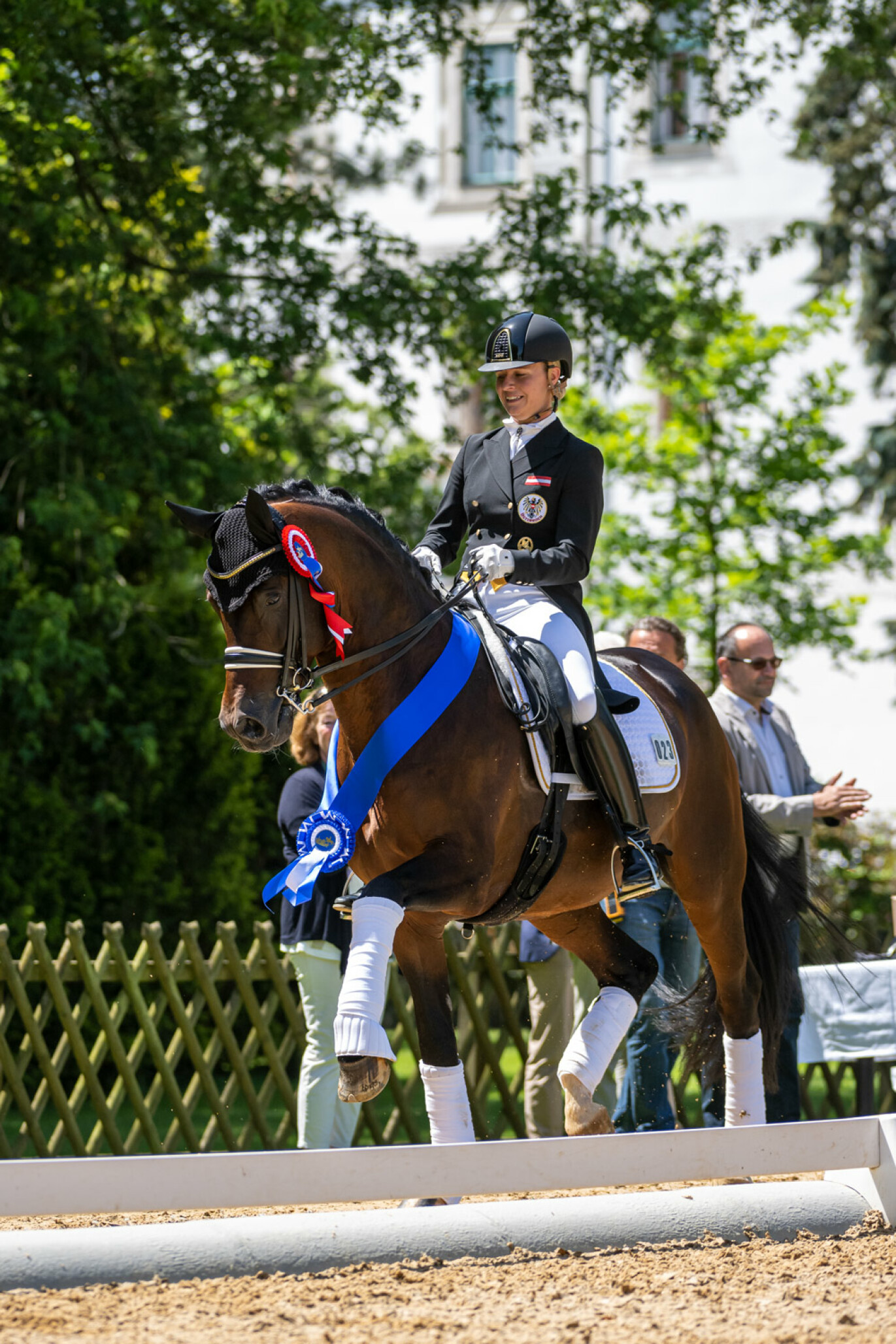 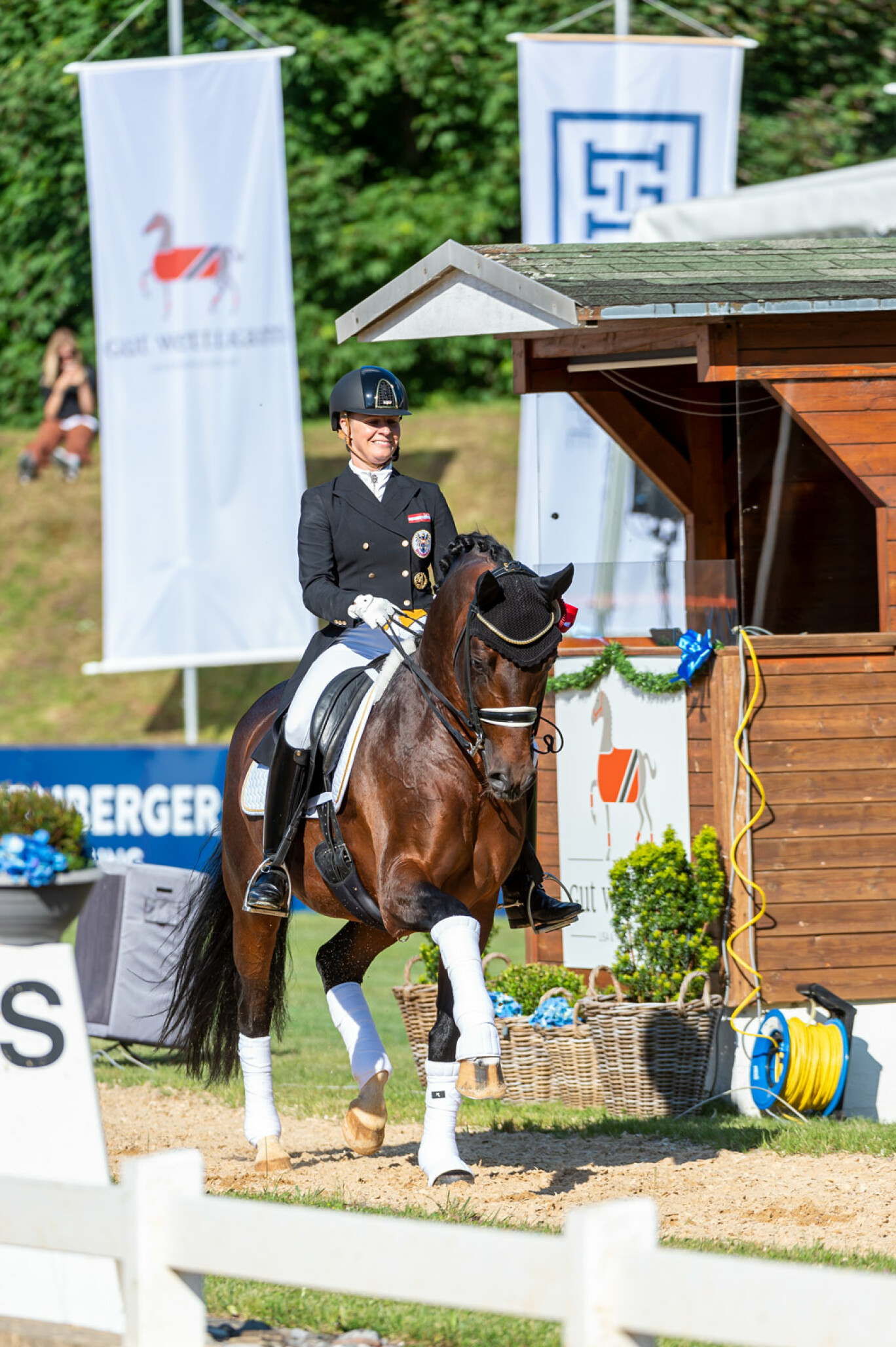 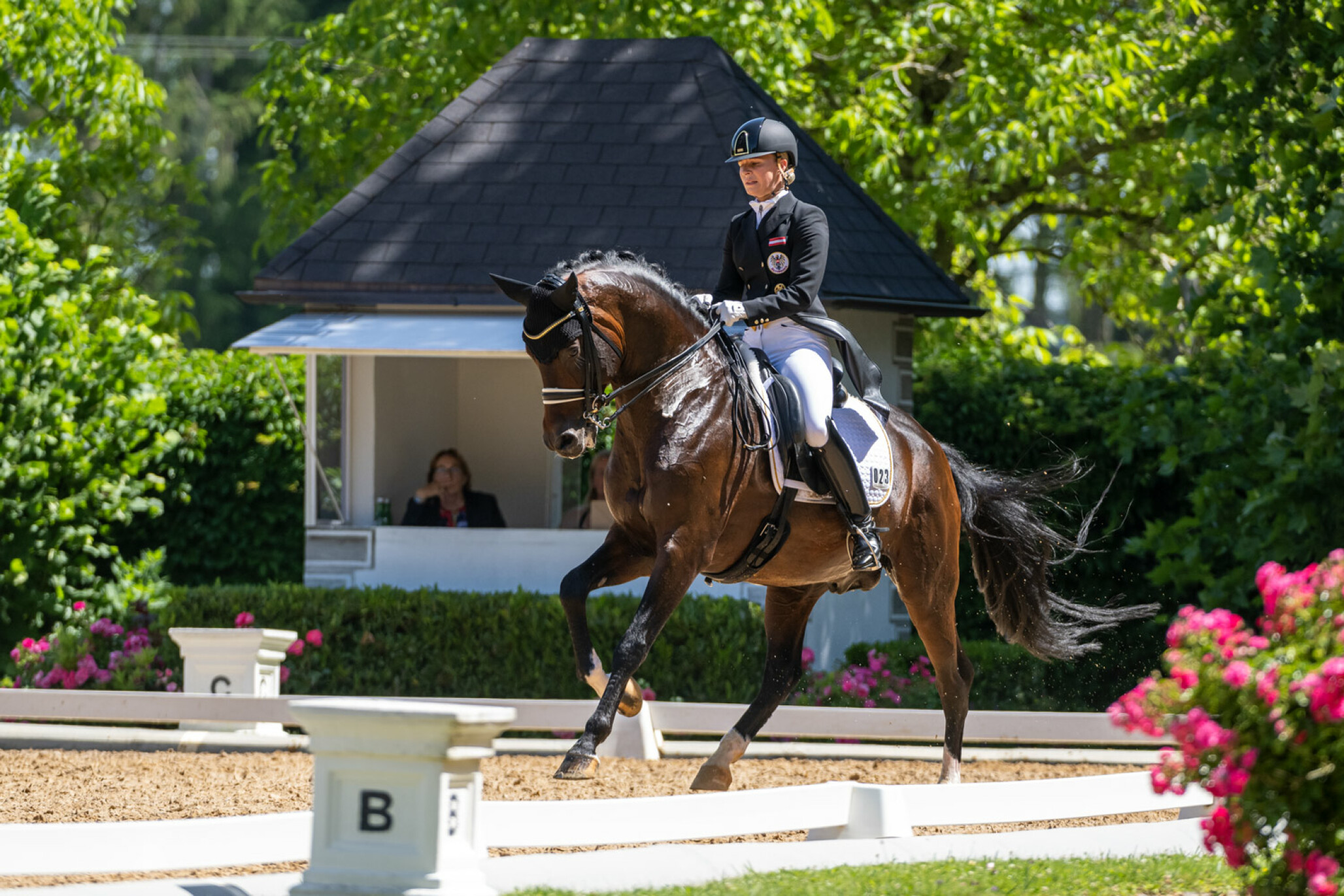 Birkhof's Topas FBW has a very special sire in the stallion of the century Totilas. On the dam's side is the famous Vornholzer strain of Kebandina, also known as the Finnländerin strain, which has produced top dressage stallions such as Don Schufro, Cappucino, Don Primero, Veneziano, Zatchmo and Lord Leopold, as well as the Oldenburg champion mare Fabina.

Topas' half-brother Lord Leopold (by Lord Sinclair I) is also already successfully under the saddle of Victoria Max-Theurer and with Cherubin (by Charmeur) the third son of Fatima was licensed in 2018. Fatima herself was successful with her breeder in riding and dressage horse competitions. Her daughter Sezua (by Sezuan) won the Württemberg Riding Horse Championships as a three-year-old, and other offspring are successful in sport up to medium (M) level.

The third dam Fantastica is dam to the stallions Classico (by Classiker), who collected international successes under his sport name Capuccino with Karin Rehbein, and Sunny-Boy (by Sandro Hit).

Don Schufro (by Donnerhall), who won team bronze with Andreas Helgstrand/DEN at the 2008 Olympic Games in Hong Kong/HKG, is out of the fourth dam, Fiesta.