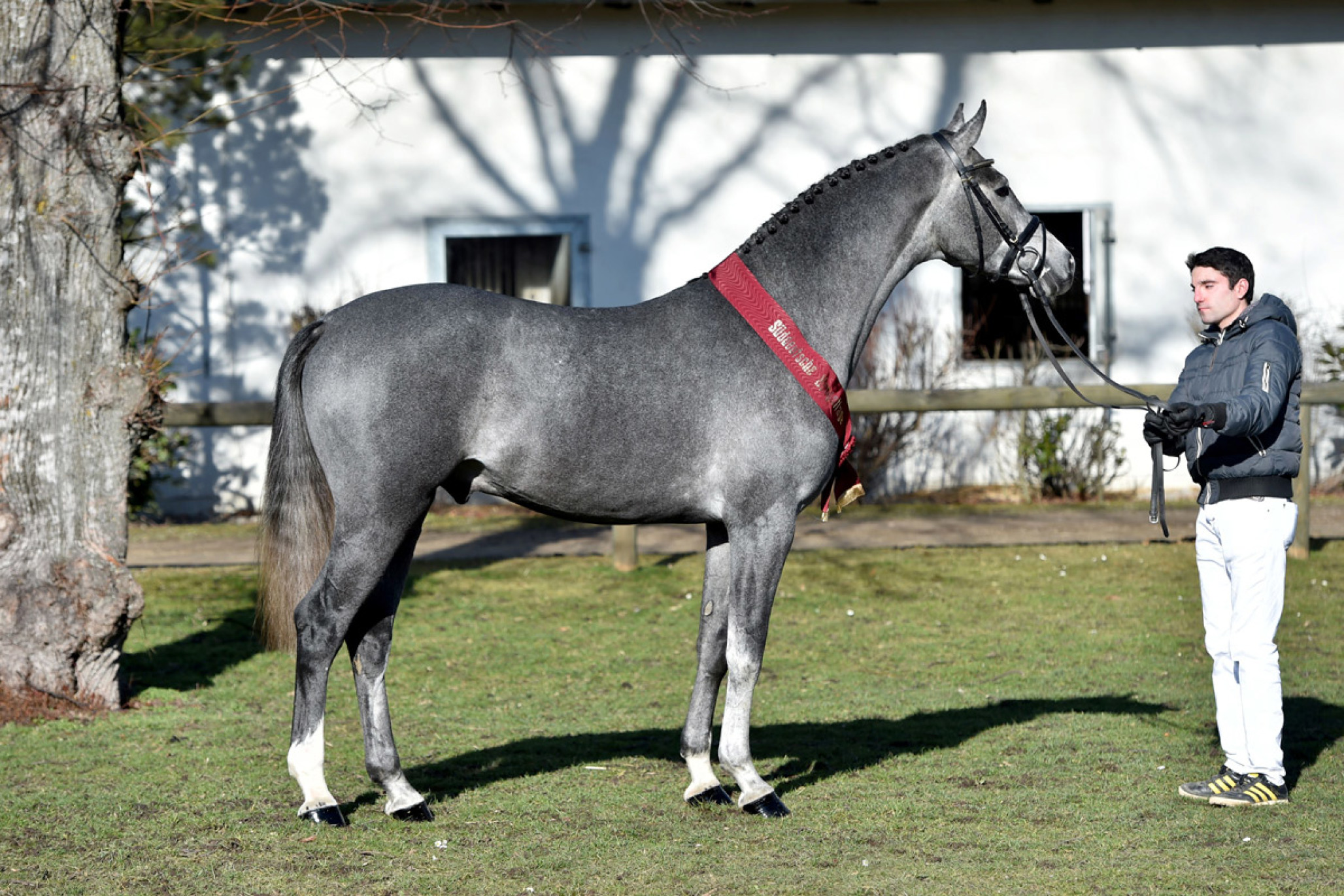 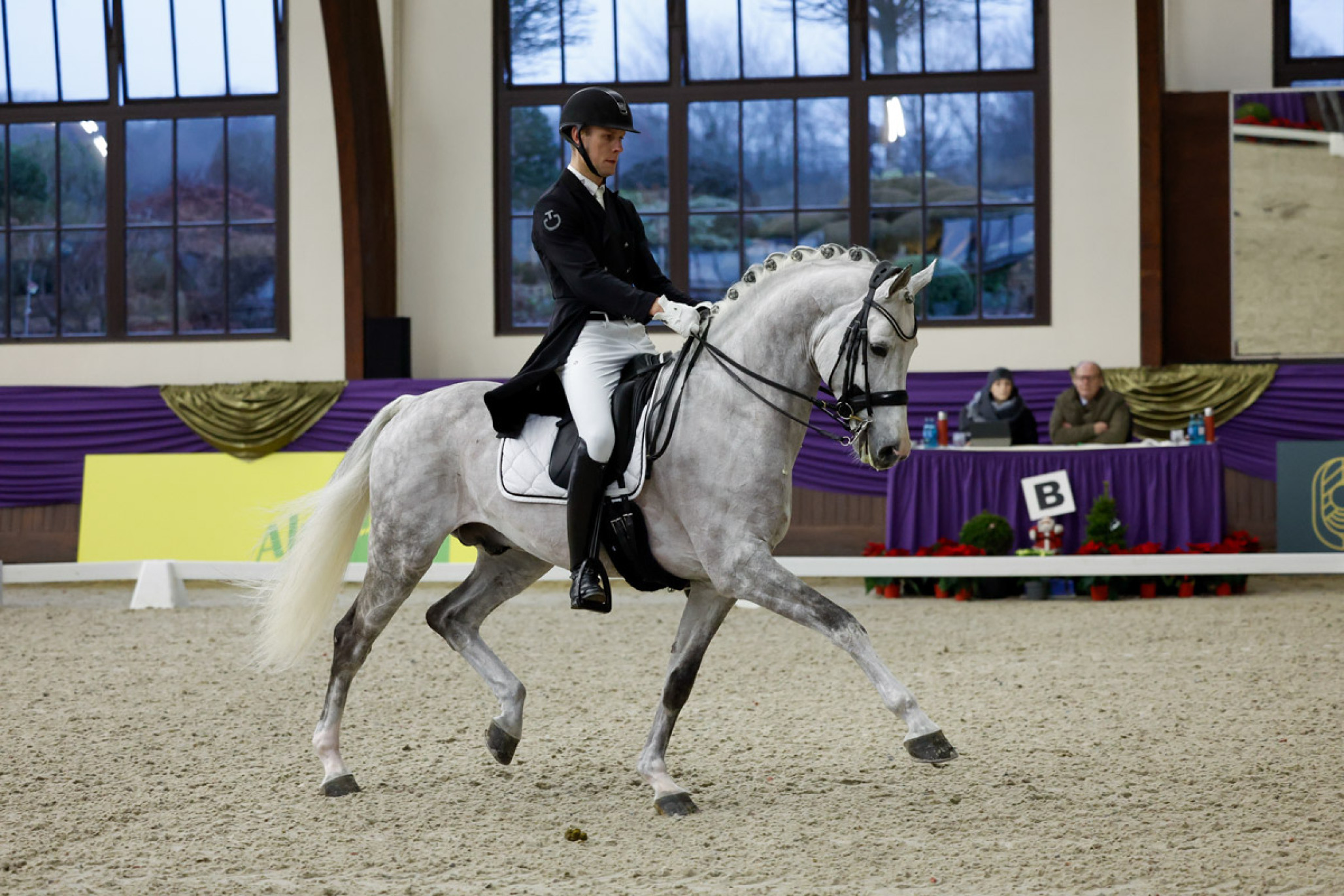 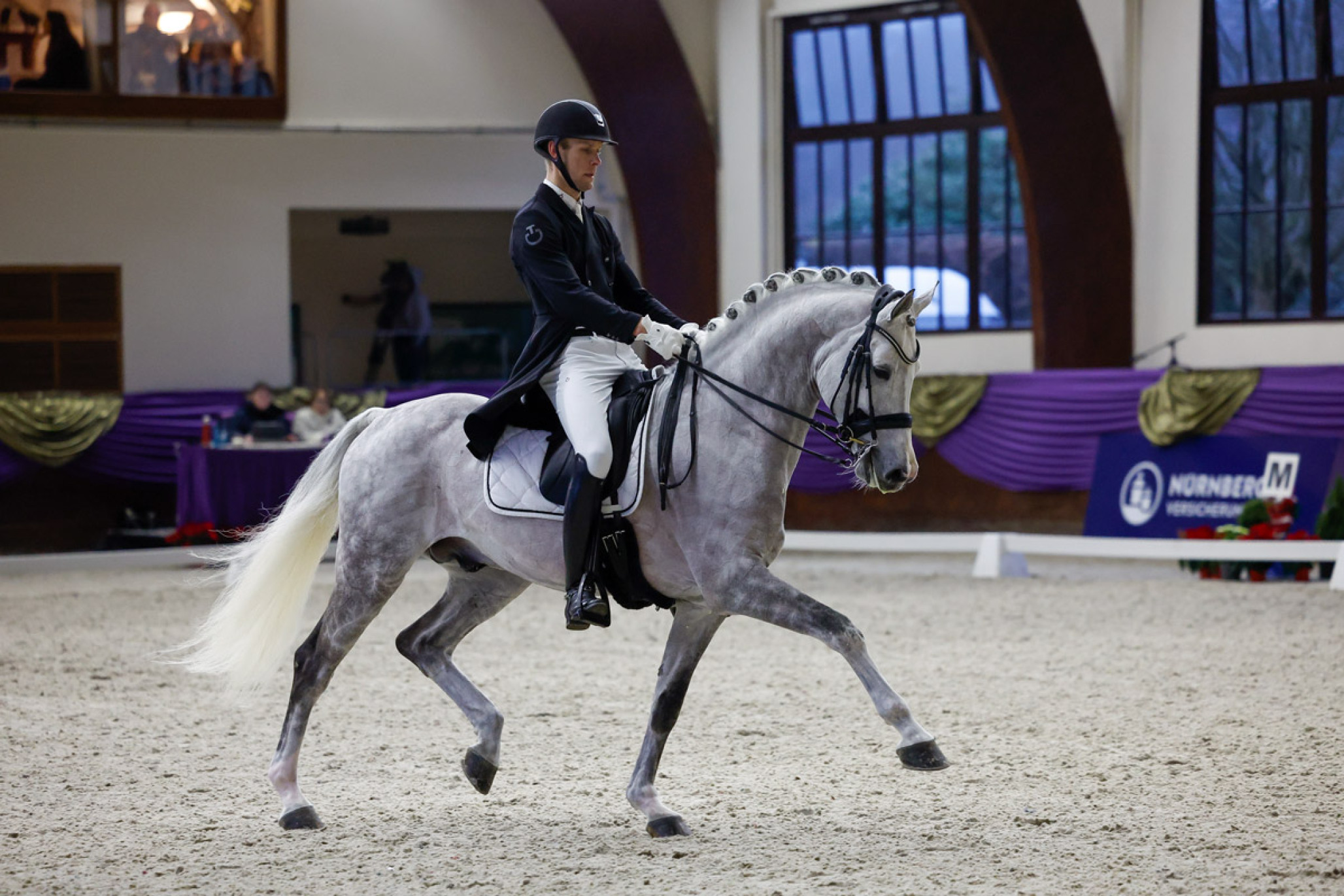 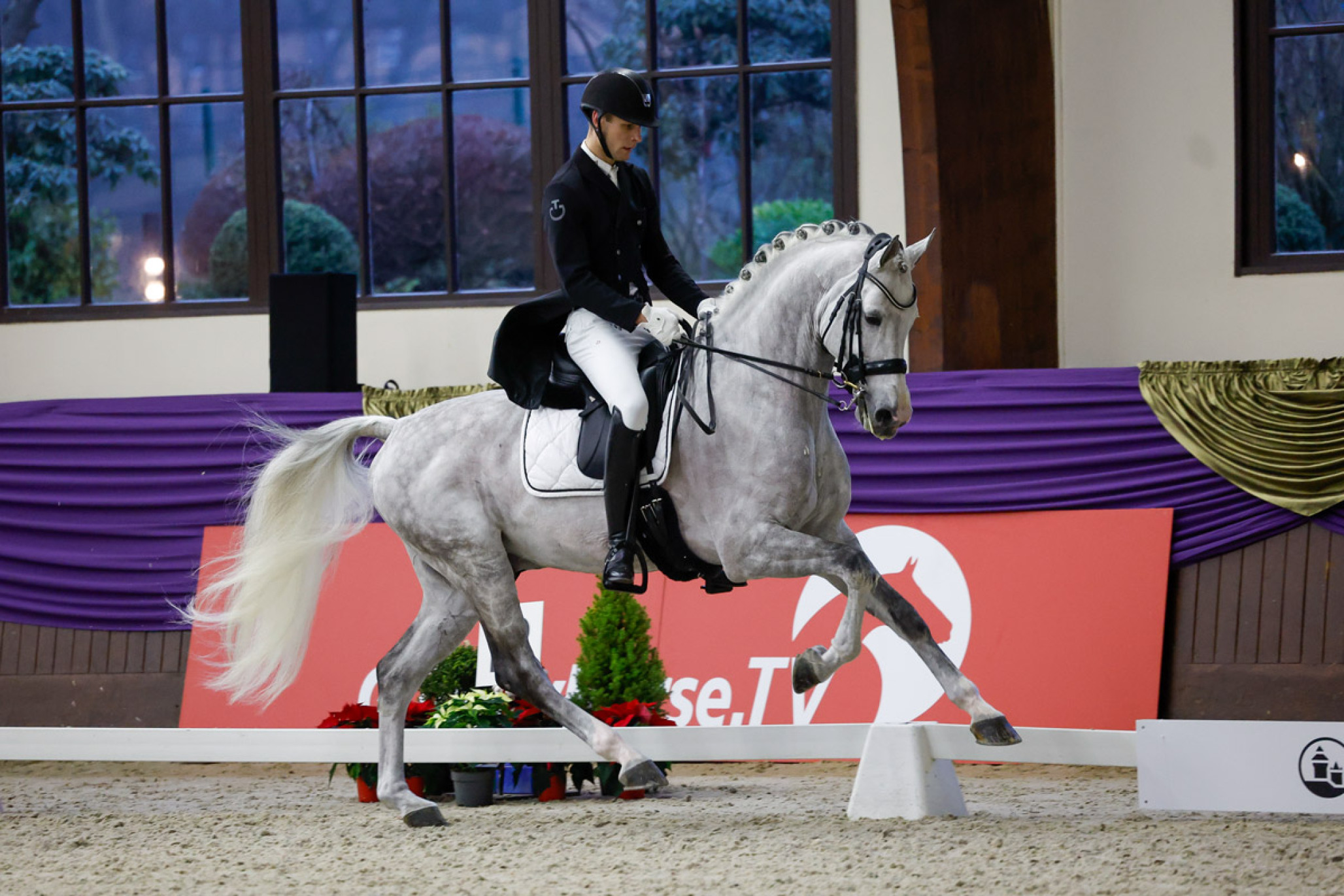 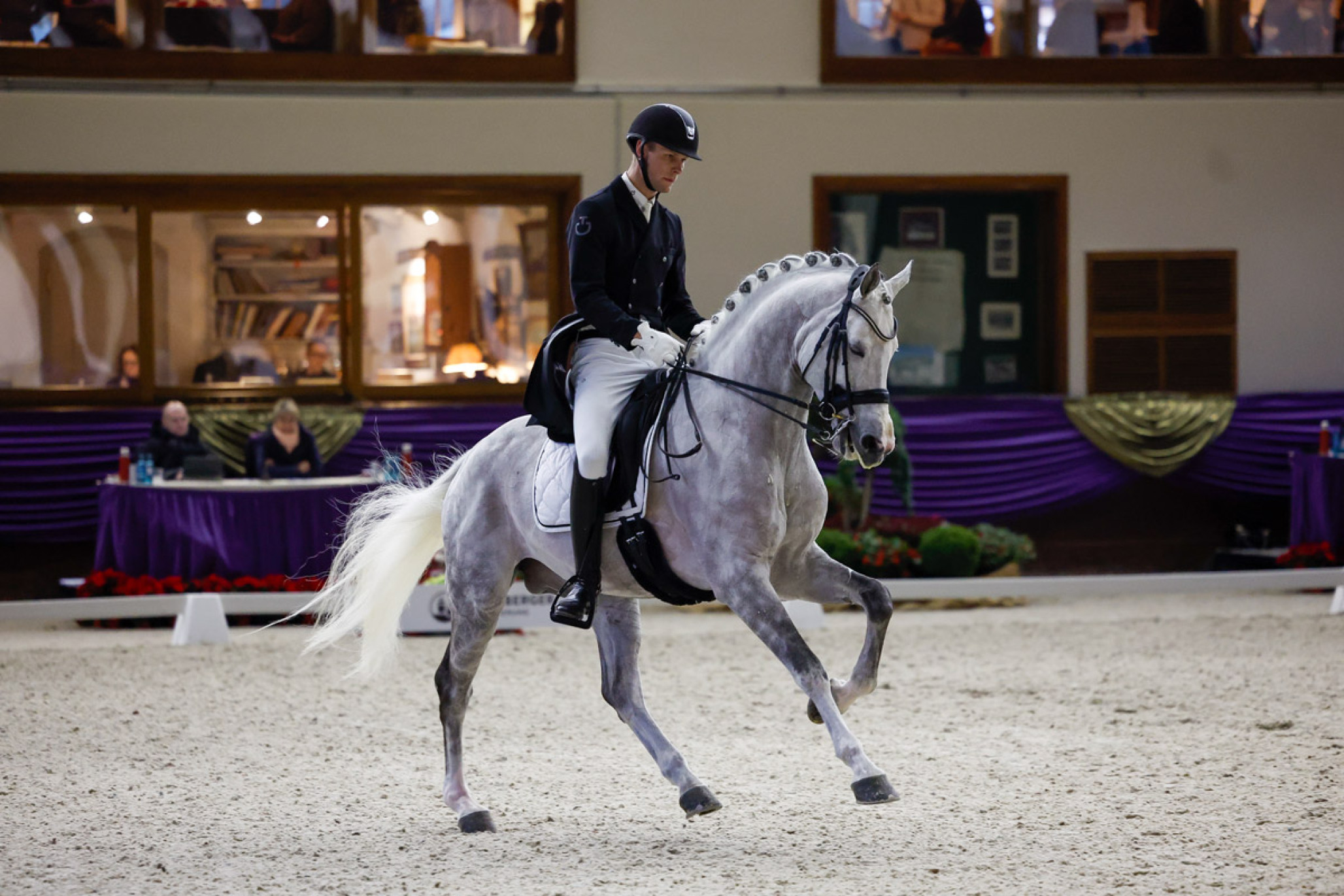 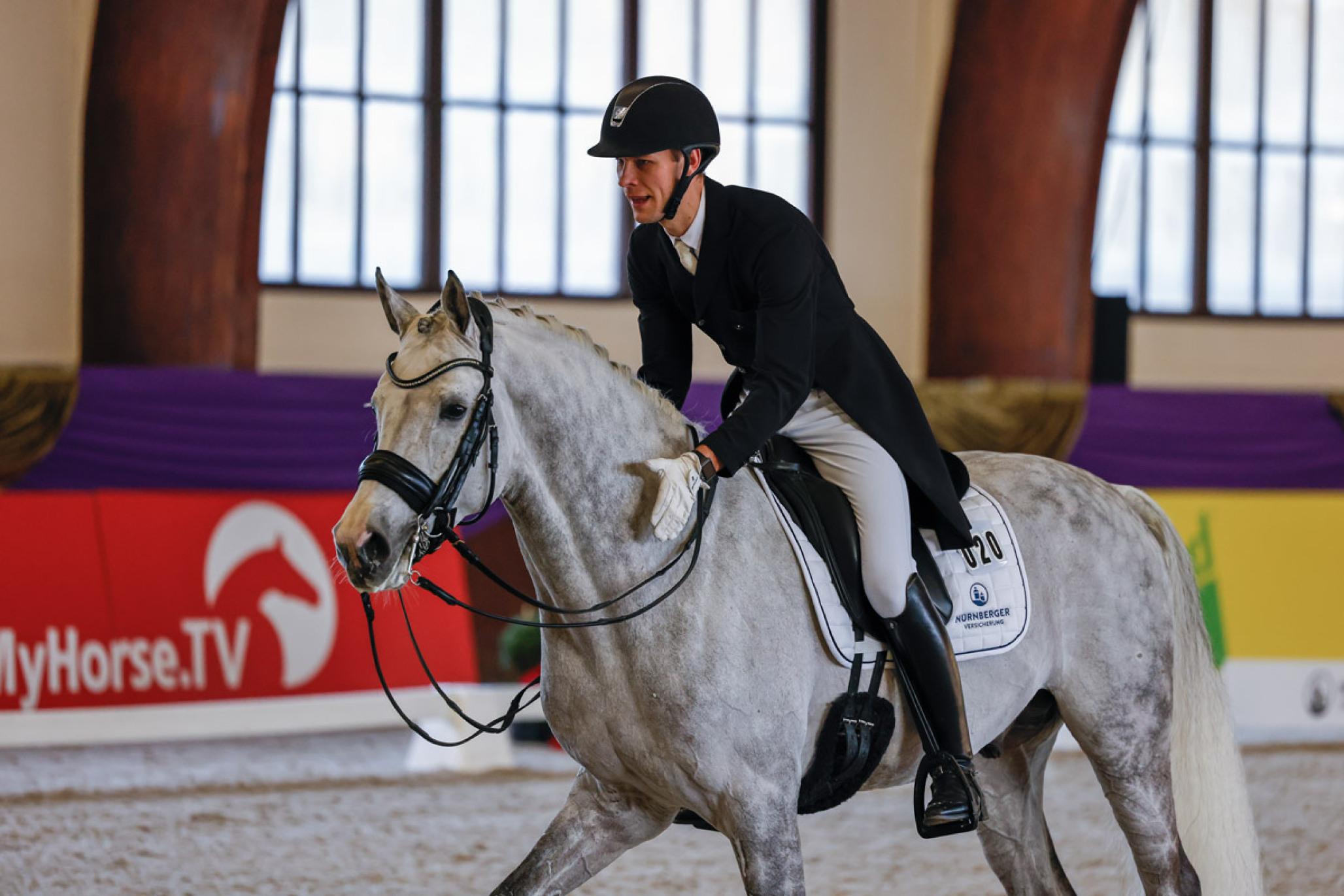 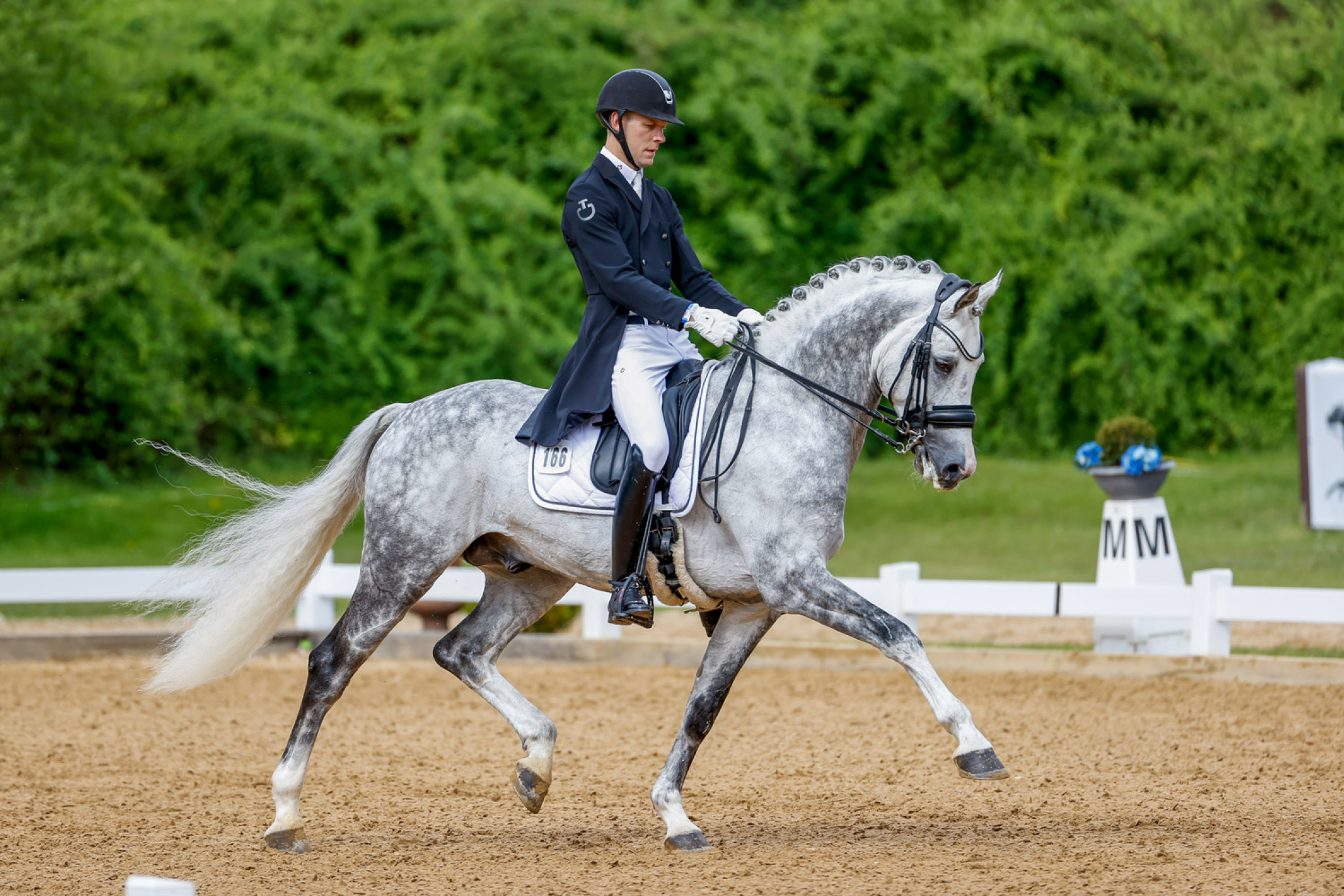 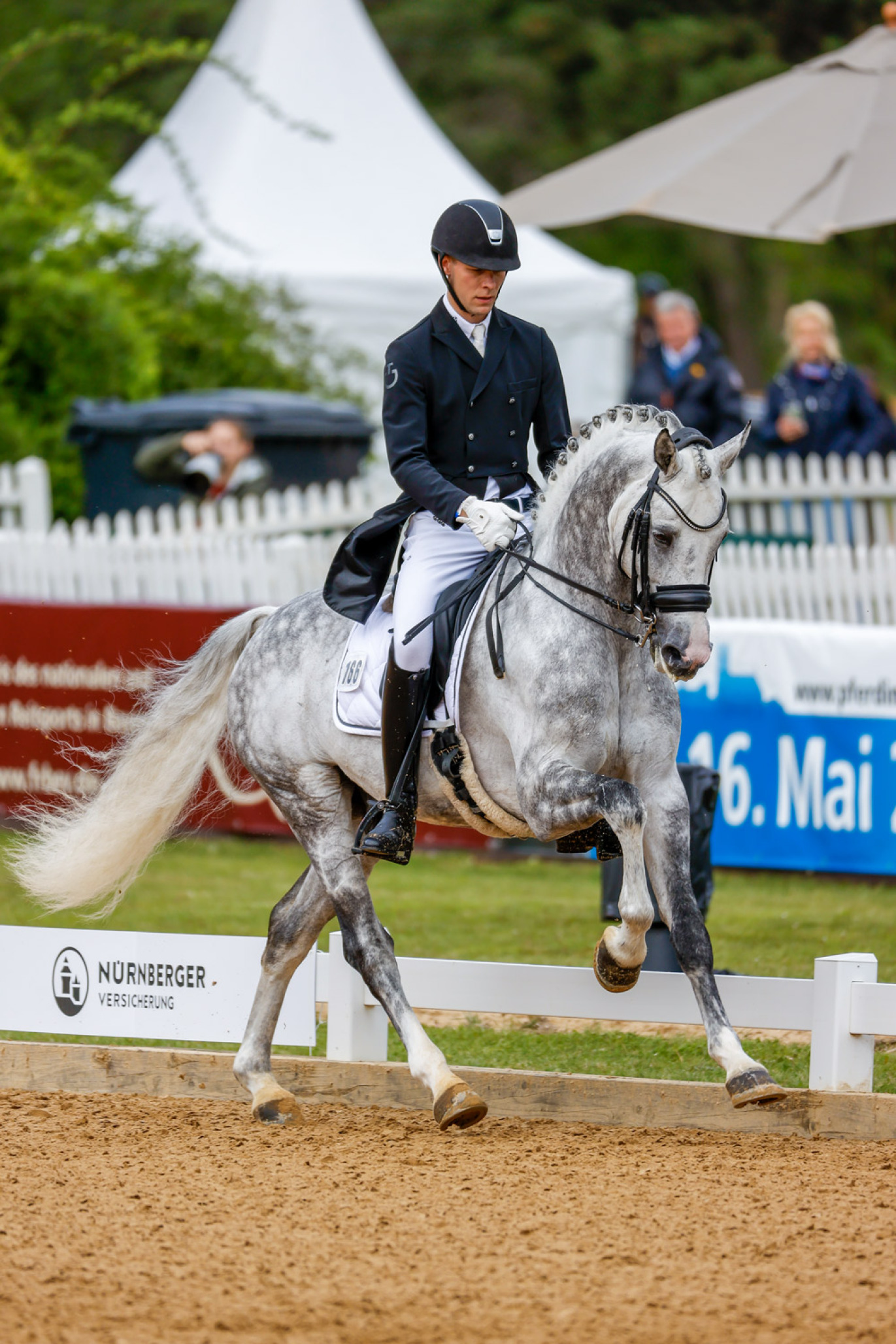 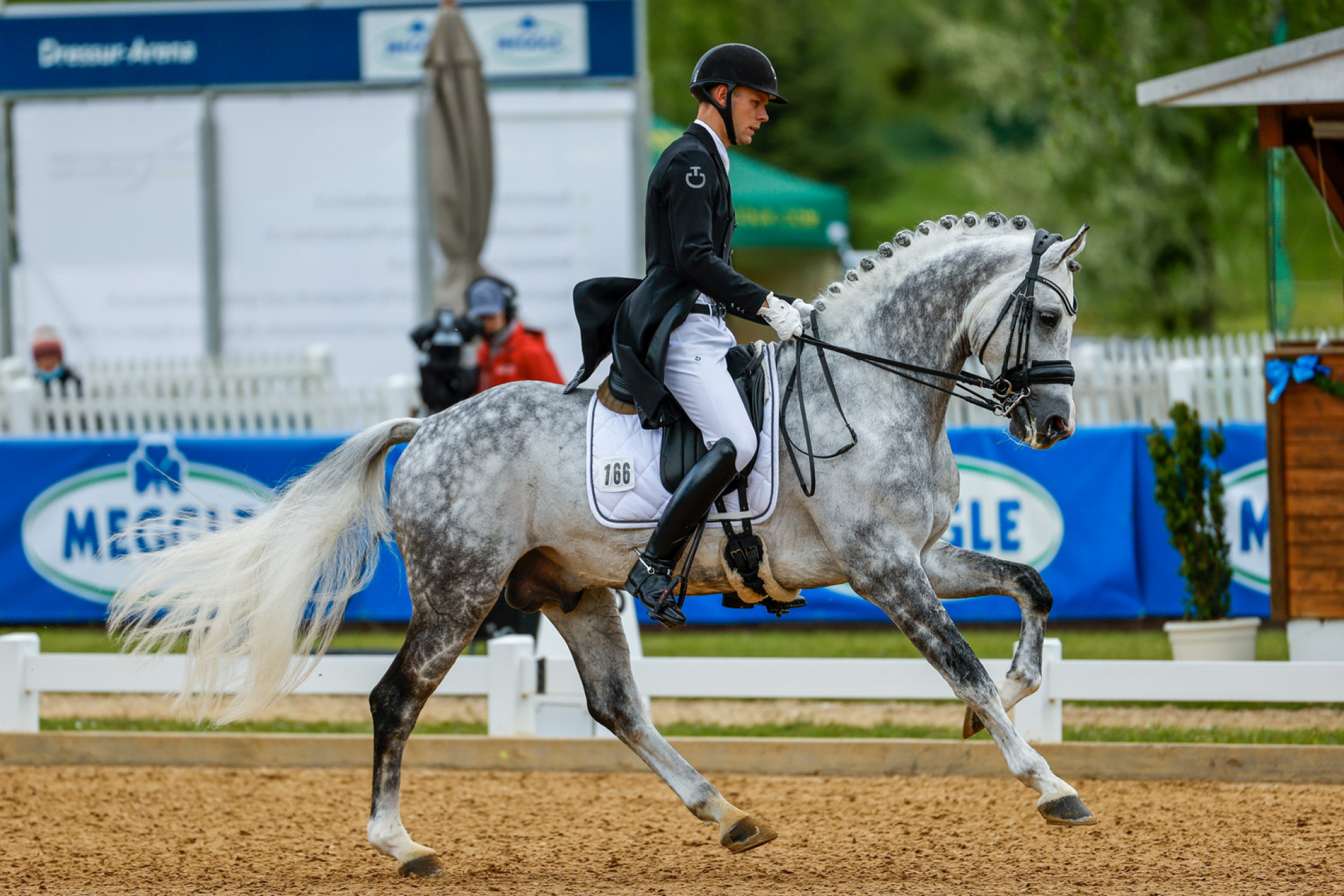 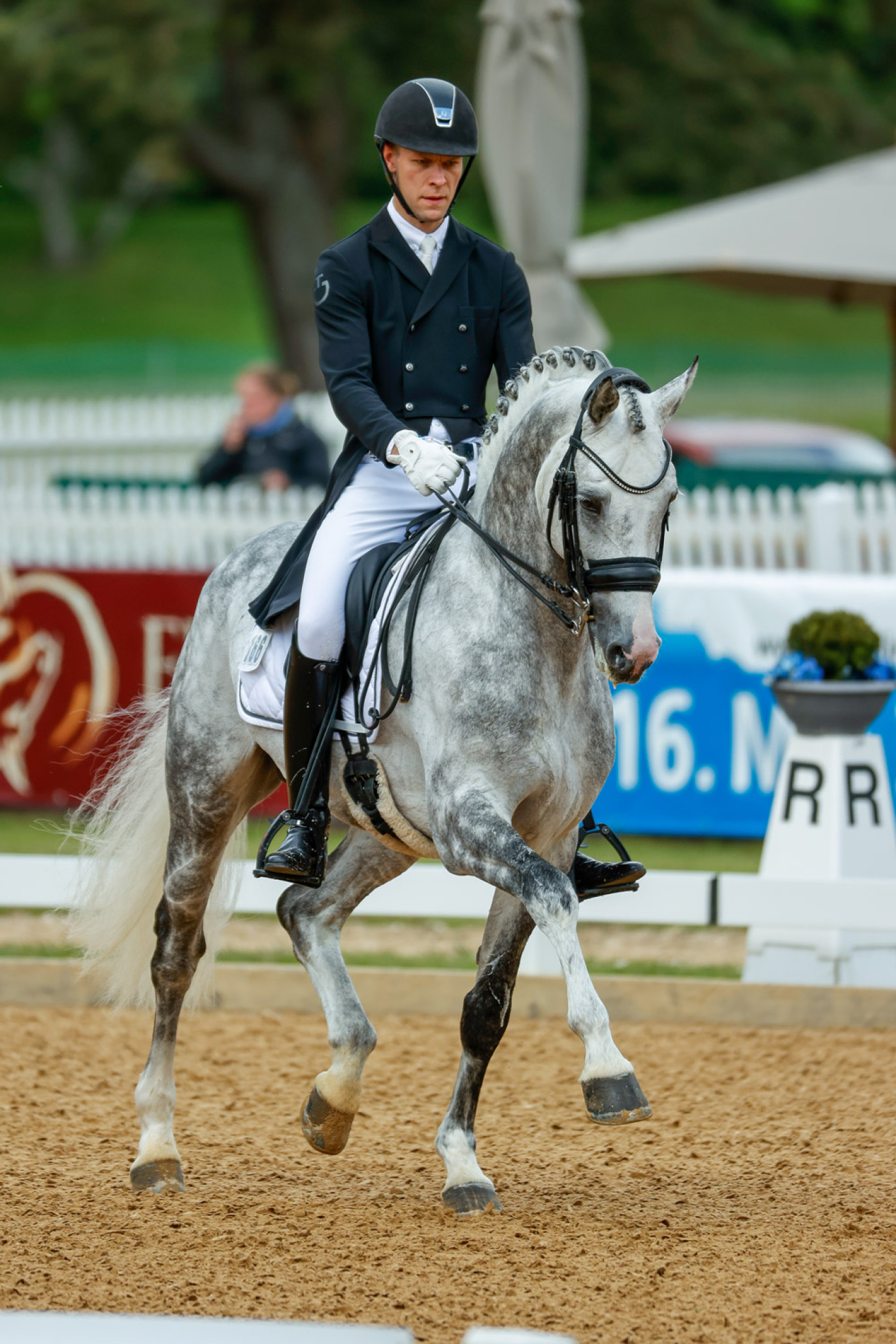 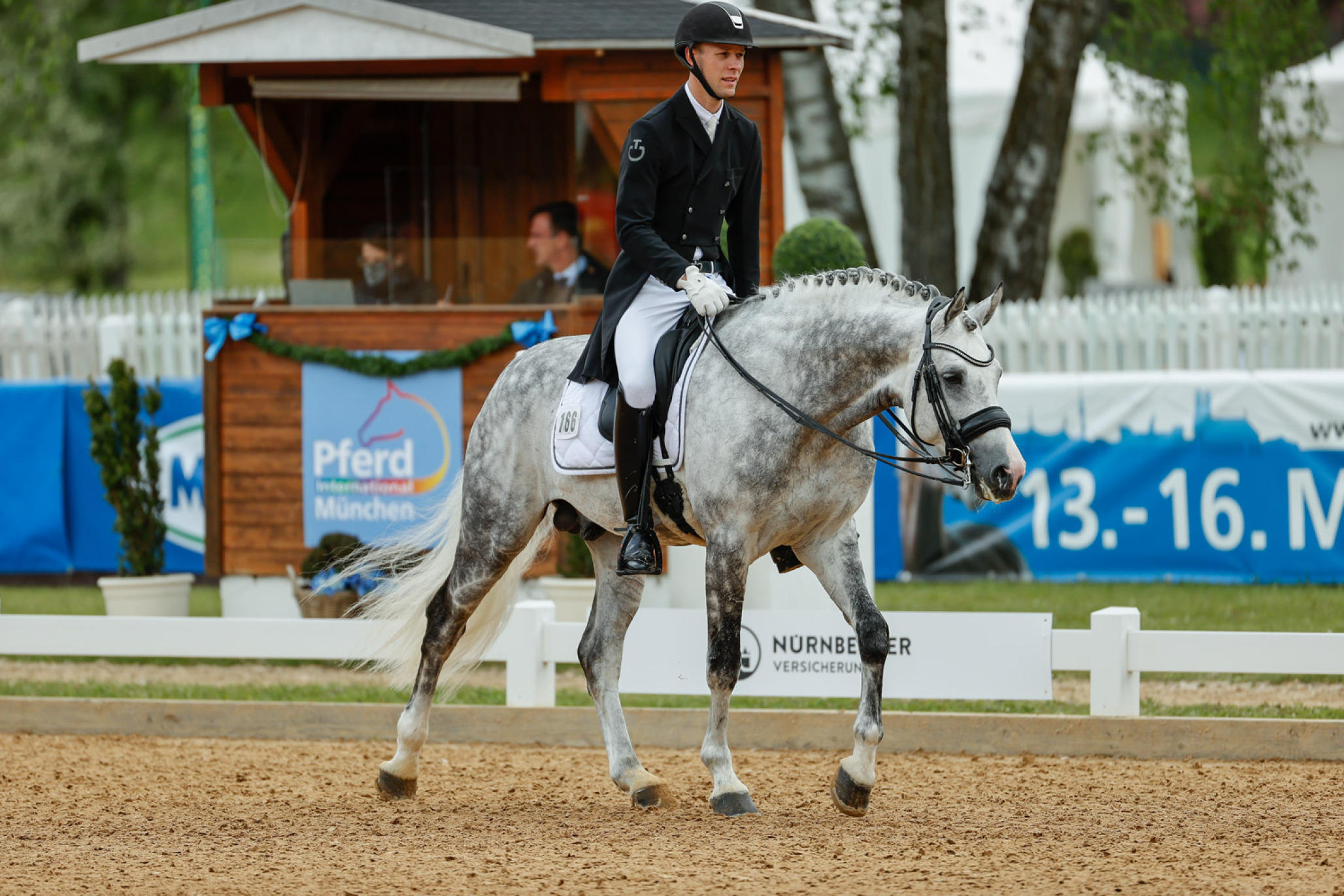 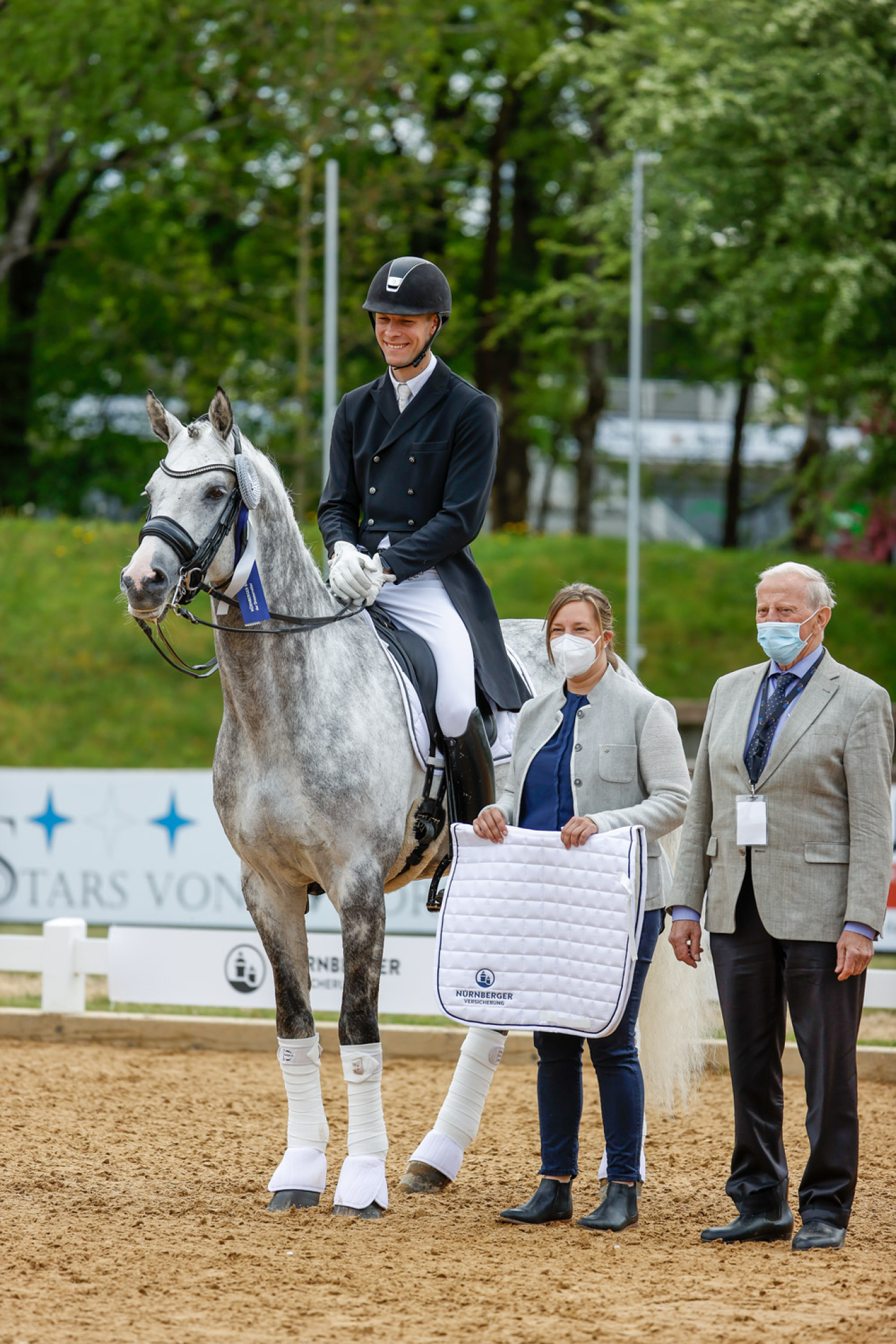 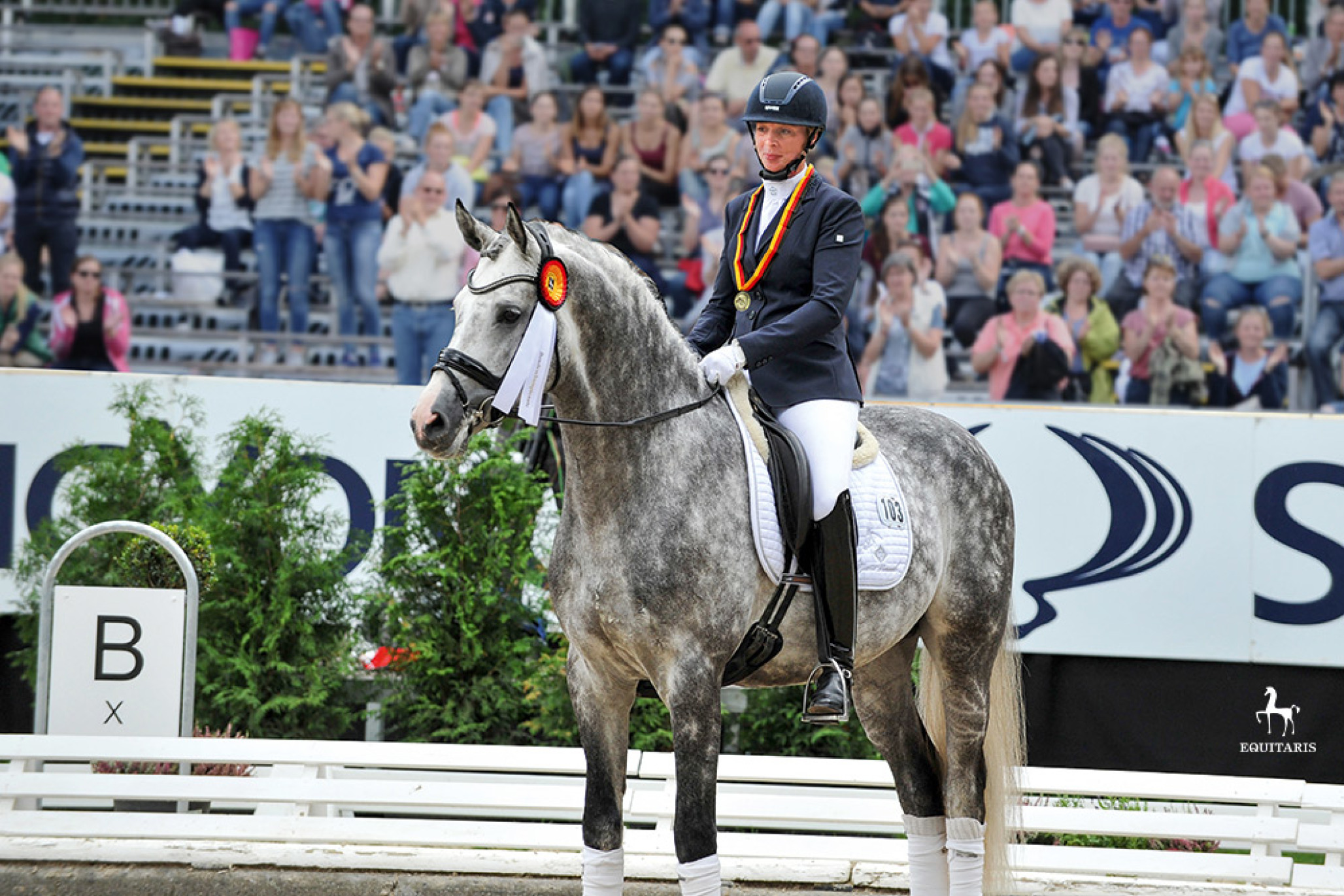 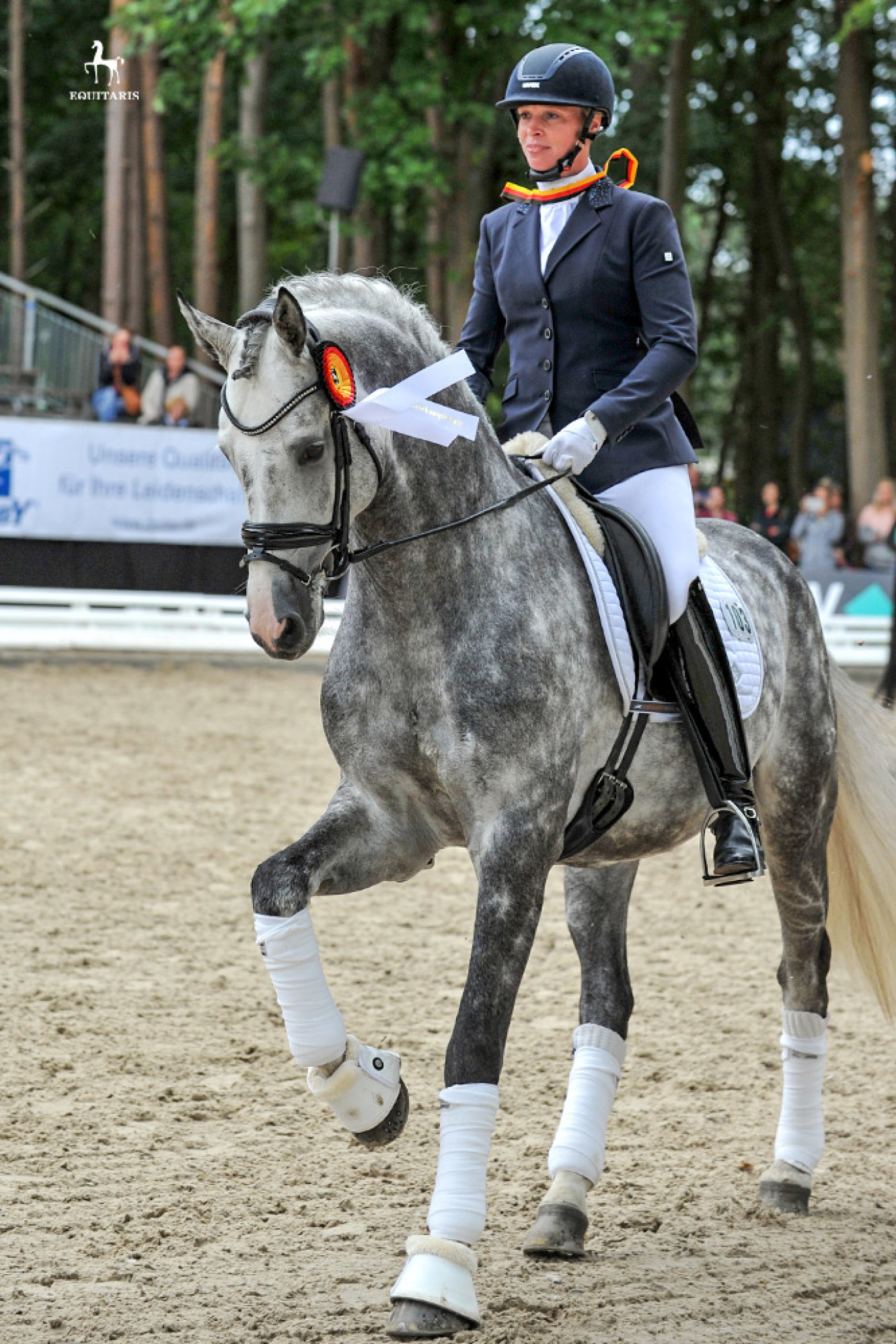 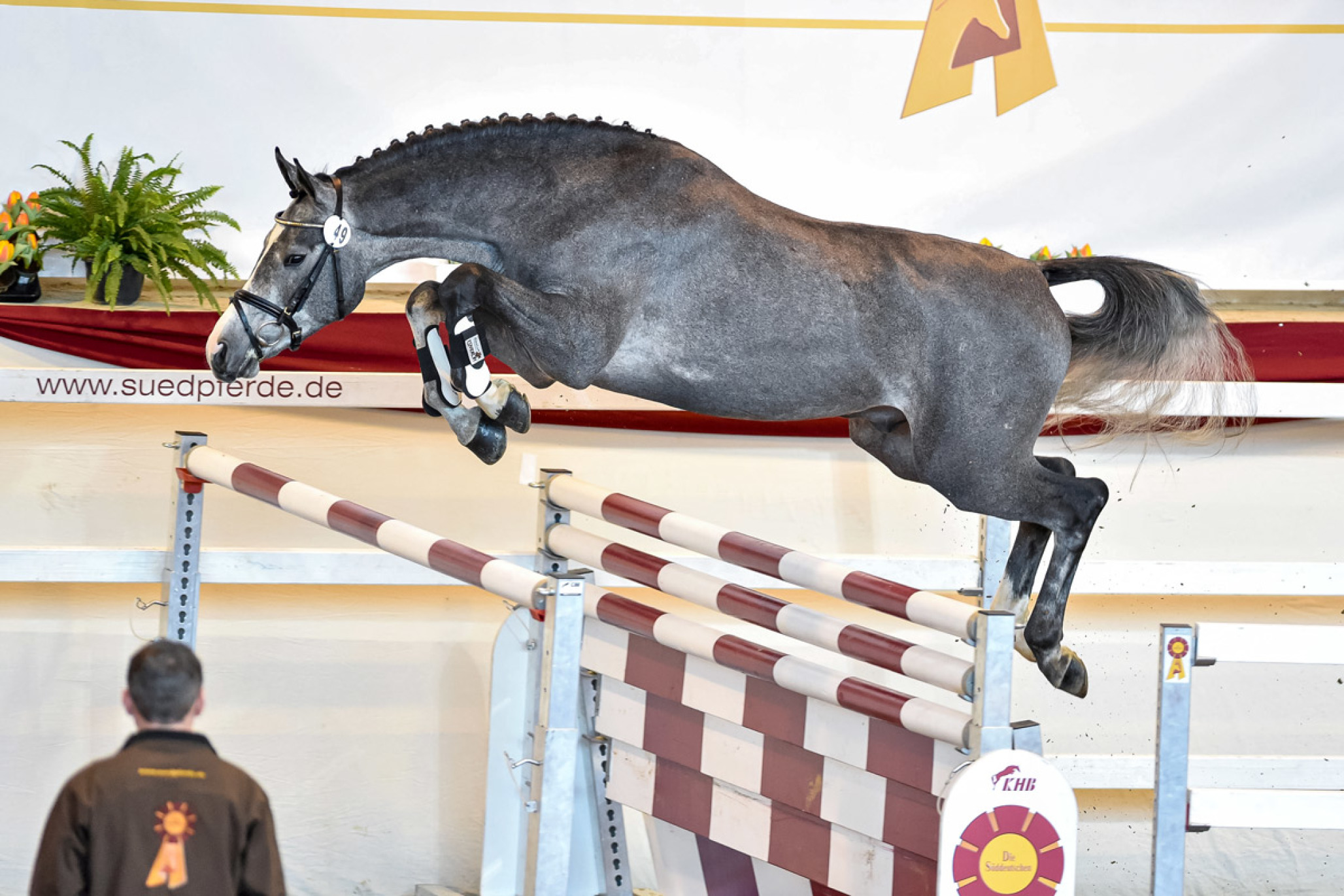 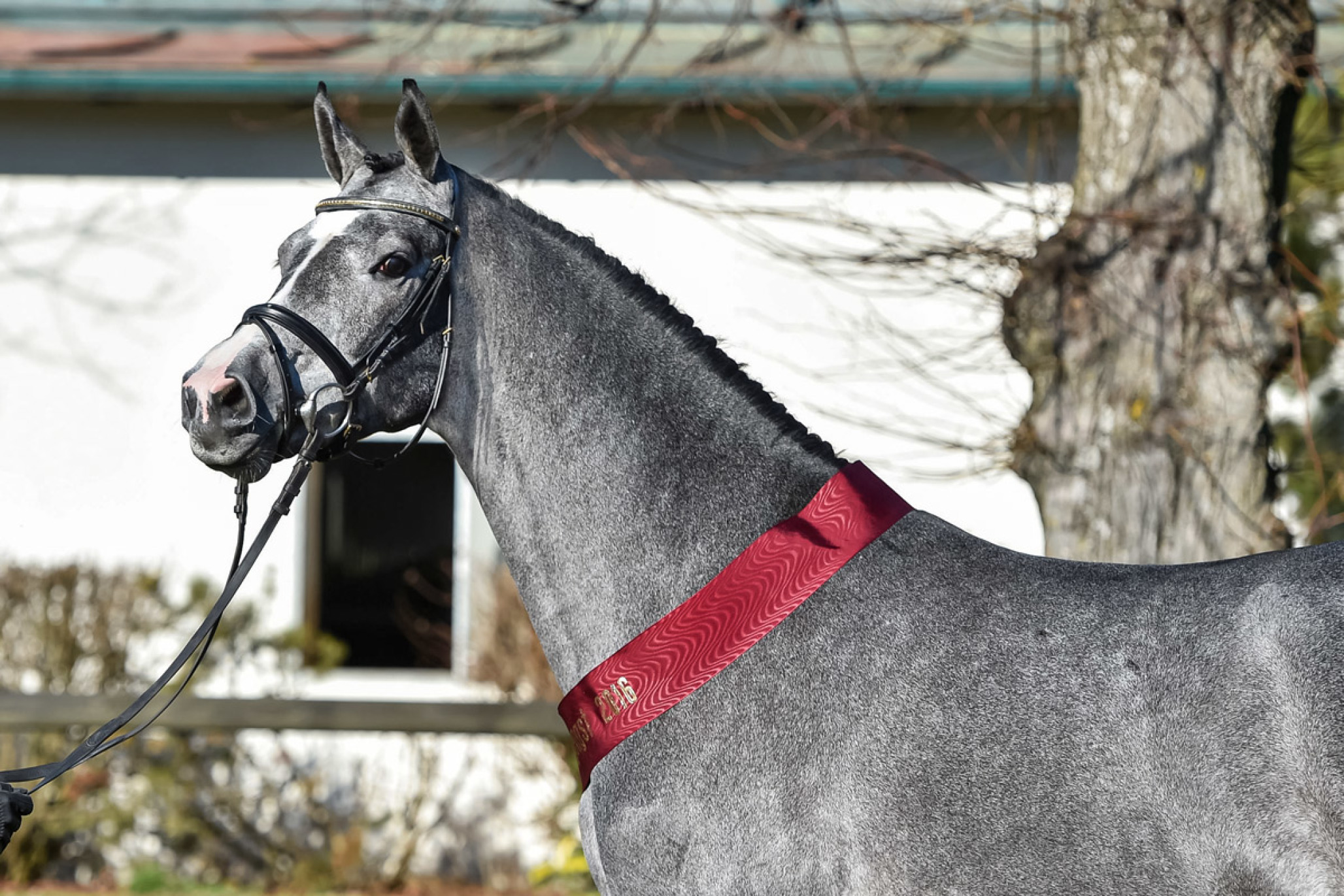 The beautifully presented gray stallion with unbelievably powerful jumping ability and, what's more, wonderful elasticity of movement, convinced at every one of his performances on the occasion of the 2016 Southern German Stallion Days in Munich-Riem. He was awarded premium stallion and named after the famous Silver Arrow driver.

At Vorwerk Stud, his dual talent quickly became apparent: as a five-year-old, he won the international dressage test for young horses at the CDI4* in Cappeln and then finished ninth in the Bundeschampionat Final. As a six-year-old, he was nominated for the World Championships for Young Dressage Horses and won bronze at the Bundeschampionat. He regularly receives top marks for his outstanding permeability and rideability. At the age of seven, Caracciola MT made his debut in the advanced level under his trainer Melanie Tewes and has already recorded victories on the international stage.

Under his new rider, the Dane Daniel Bachmann Andersen, Caracciola MT placed a close second in the Burg Pokal qualifiers in Munich and Schenefeld with 76.634 and 74.024 percent respectively.
Caracciola MT scored in the Burg Cup Final in Kronberg with his good basic gaits, and here especially his walk mechanics. Very effectively staged by his rider Daniel Bachmann Andersen, Caracciola MT is "a horse of the future with the perspective of Grand Prix", as the jury commented. With a score of 72.659 percent, the pair ranked seventh in the demanding St. Georges Special test.

Subsequently, Cracciola MT was promoted towards the Grand Prix. Shortly before his debut in the premier class at the middle of 2022, he suffered a severe colic, had to be operated on and was finally put to rest.

His sire Chin Champ placed sixth in the 2011 Bundeschampionat Final for five-year old show jumpers with Lars Bak Andersen/DEN. Brought into international sport by Thomas Konle, he then won the Nations Cup Children in Wierden/NED under the young Beeke Carstensen. Besides Caracciola MT, three more sons were licensed. His first offspring are successful in difficult courses.

The grandfather Calido I celebrated series wins in tests for young show jumpers up to medium (M) level. With over 80 licensed sons, he is one of the most important sires for young show jumpers. His offspring lifetime earnings amount to around 4.5 million Euros. Outstanding among his numerous internationally successful offspring are the three-time German Champion Coupe de Coeur and DSP Cashmoaker, who won the German Championships in 2015 with Denis Nielsen.

The great-grandfather Literat has two licensed sons. His offspring won over 350,000 euros.

The fourth dam produced L'Eperon (by Lord), who was German Champion with Carsten-Otto Nagel in 1999.

From the dam line (Holst. Stamm 1463) there are also the licensed stallions Charisma, Baldini I and II, Carano and Lesotho.